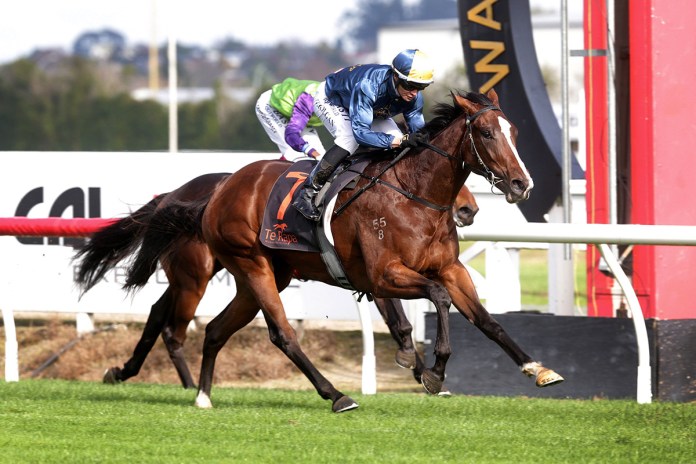 2 f Vanbrugh – Cream Of The Crop by New Approach

Mustang Valley’s (2 f Vanbrugh – Cream Of The Crop by New Approach) breakthrough win in the Sky City Hamilton 1200 (1200m) at Te Rapa last Saturday gave her breeder and part-owner Windsor Park Stud plenty to cheer, as the promising youngster’s success was also the first for her sire Vanbrugh (Encosta De Lago), who stands at the famous Cambridge farm for $5,000 (incl. GST).

The Murray Baker and Andrew Forsman-trained filly was second on debut and placed fourth in an Ellerslie Listed race at her second outing. Fifth leaving the back straight, she went a lane wider from inside the 600 metres and rounded into the straight four-wide. Accelerating nicely, she took over the lead at the 200-metre point and won comfortably under Vin Colgan by a length and three quarters from Riverplate (Flying Artie), with Treasure State (Trust In A Gust) five and a half lengths behind the winner in third.

Mustang Valley’s sire won the Spring Champion (Gr 1, 2000m) in the spring of his three-year-old season, and connections are looking ahead to next campaign for the filly.

“She has always looked a promising filly but not really a natural two-year-old,” said Forsman after the race. “She can go to the paddock for a short break and then I would think we will start getting her ready for some of those better three-year-old races in the spring.

“She has a big, strong action and is quite physically mature for her age, but when she does strengthen up fully, she will be a very handy horse.”

Mustang Valley is the first foal out of Cream Of The Crop (New Approach) who missed to Vanburgh in 2019. The mare has an unnamed Charm Spirit (Invincible Spirit) filly on the ground and is in foal to Darci Brahma (Danehill).

Cream Of The Crop, who won a 1550-metre Morphettville maiden from seven starts for trainer Matthew Dunn, was passed-in at $60,000 at the 2014 Premier Yearling Sale. She sold to Windsor Park Stud for just $5,000 at the 2017 Gold Coast National Broodmare Sale. The mare is out of a half-sister to the Listed winner Buenos Dias (Peintre Celebre), who was Grade 1 placed in the US.