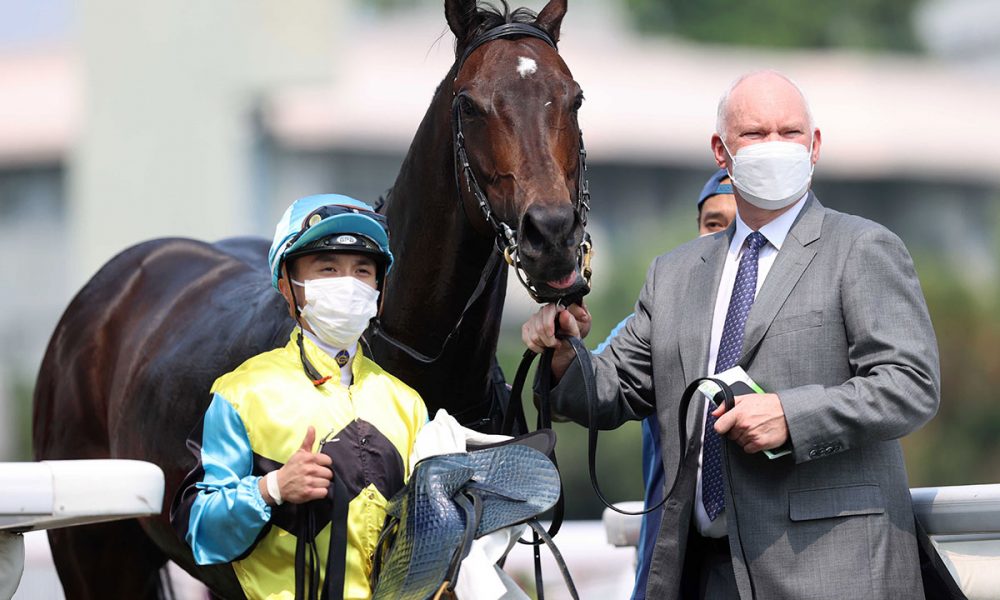 Freshman Hong Kong trainer Pierre Ng and new apprentice Angus Chung have both made a successful start to their tenures in the jurisdiction, recording winners within the first week of the new racing season in the city.

Ng, a Hong Kong blueblood as the son of one of the city’s longest-serving trainers Peter Ng, had a thorough grounding at Sha Tin as an assistant to trainers of the calibre of John Size, Francis Lui and Paul O’Sullivan.

Particularly associated with O’Sullivan’s champion sprinter Aerovelocity (Pins), as well as Lui’s horse of a lifetime Golden Sixty (Medaglia D’Oro), Ng follows in the footsteps of last season’s champion trainer Frankie Lor in going out on his own after working for Size.

A string of top-four finishes at the opening meeting at Sha Tin on September 11 laid the foundation for a win to come early on and that victory came at the first Happy Valley meeting of the season with just his ninth starter.

South African import Super Commander (Vercingetorix), joining Ng after making his way through a number of yards at Sha Tin, led all of the way to take the Class 4 Big Wave Bay Handicap (1000m) under Luke Ferraris.

“It’s a very good feeling to get my first winner,” Ng told the Hong Kong Jockey Club. “On the first day it was about proving to myself whether we were doing the right thing and going the right way and it seemed ok. I’m so lucky to get my first winner on the second day of the season and it’s obviously a totally different feeling from when you are an assistant trainer and, of course, prize-money wise as well.

“Super Commander did surprise us a little bit. Luke said in the trials the horse was afraid of others coming across him, so we put on the full blinkers and he just jumped and got going by himself and he did the job.”

Chung then made a splash with his seventh Hong Kong ride, partnering David Hall’s honest Quadruple Double (Zoustar) to an all-the-way victory on the Sha Tin dirt.

For the first couple of months of his 10lb claim, the 26-year-old is restricted to riding at Sha Tin so his maiden victory also came at just his second meeting.

Having ridden in South Australia for the last 18 months, winning 76 races, Chung – who is indentured to a former champion jockey in Tony Cruz – hopes to follow other former Adelaide trainees like Matthew Poon and Jerry Chau who have both reached a two-pound claim having ridden more than 90 winners.

“It feels amazing,” Chung said. “That race wasn’t ideal and I tried to get the horse running as soon as I could, he rolled very well and he did a very good job. I’m so happy.

“I thought I didn’t do too bad on my first day, I made a couple of mistakes, but I’ll learn from my mistakes.

“In Hong Kong, they race to take a tactical position while in Adelaide, they’re soft and slow. I have to remind myself to get a position first, that’s the big difference between Adelaide and Hong Kong.

“I’m lucky to be racing with good people, good jockeys. The competition will make me improve a lot.”

Indentured to South Australian trainer Jon O’Connor, Chung arrived in Hong Kong with a big wrap from his former boss – something that Hall, who used to train out of Adelaide, was keen to explore.

“They all wrapped him big time in Adelaide,” Hall said. “Jon O’Connor said, ‘See if you can get your hands on this boy, he’s very good.’ He’s certainly good off the track. I’ve been impressed with his attitude and the way he’s handled things.

“Quadruple Double was the perfect horse to put him on. It’s nice to get him on the board. He’s been a good horse for the stable. He’s won five. It just got a bit difficult for him at the rating and then he felt the tracks a little bit and was unsound for a while. Back on the dirt now, it’s good just to pinch that one.”

All eyes are now on high-profile New Zealand trainer Jamie Richards, who is yet to saddle up a starter despite having 47 horses to his name.

With no entries this week, Richards will have to wait until at least the sixth meeting of the 88-card season to have his first runners – by which time every other trainer will have had at least 12 starters.

Among the horses in his stable is Buddies (So You Think), who scored a shock win in the Celebration Cup (Gr 3, 1400m) last season before finishing well down the track in 10 subsequent starts for Tony Cruz.

With Buddies missing the Celebration Cup – Hong Kong’s first stakes race of the season – for the first time in three years, a new winner will join an honour roll that boasts horses of the calibre of Gold-Fun (Le Vie Dei Colori), Beauty Generation (Road To Rock) and Golden Sixty (Medaglia d’Oro) in the last decade.

Ng will also have his first stakes runner with Duke Wai (Per Incanto), third in the Class 1 HKSAR Chief Executive’s Cup (1200m) on opening day.