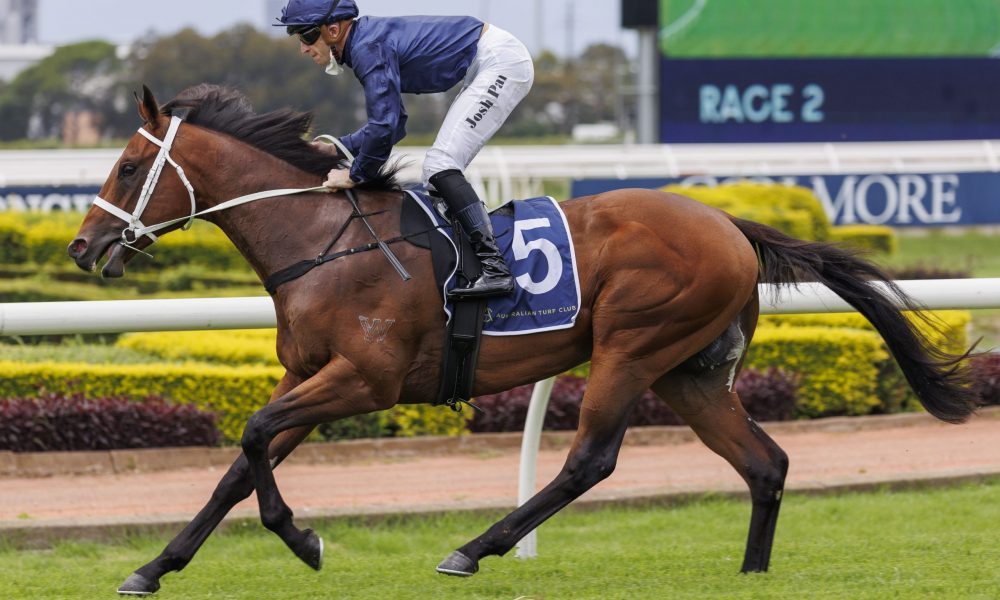 3 c Not A Single Doubt – Aloona by Smart Strike

Coolmore’s million-dollar colt Northern Beaches had shown glimpses of his talent in four starts as a juvenile last season, but in returning at three at Canterbury on Wednesday, the son of Not A Single Doubt (Redoute’s Choice) displayed a growing maturity in routing his maiden opposition to win by two and a quarter lengths in the three-year-old maiden handicap (1200m).

The Chris Waller-trained colt had placed in three of his four previous outings, finishing second to subsequent Pago Pago Stakes (Gr 3, 1200m) runner-up Sweet Ride (Deep Field) on debut, before finishing down the field in the Pierro Plate (1100m).

But, having travelled closer to the speed than on previous starts, Northern Beaches impressively exploited a gap when moving off the heels of the leader and burst clear in the final 200 metres to defeat stablemate Sha Of Gomer (Shalaa) with Scientist (Zoustar), the first foal from dual Group 1 winner Global Glamour (Star Witness), four lengths behind the winner in third.

For Waller and his Coolmore-led syndicate, bigger targets were always the plan, with Wednesday’s maiden an opportunity to get a ‘1’ in his form book.

“Now he has matured and he is going to be a lovely three-year-old for us,” stable representative Charlie Duckworth said. “It was more about trying to get the win on the board today and then he’ll be back into the feature races coming into the spring carnival.

“Wednesday grade up to the Group races is a big old jump, but him being able to overcome the stop-start tempo of the way his race was run shows he’s got the class to do it.”

Bred by David Chaikin’s Woodpark Stud, Northern Beaches was a $1 million buy for Coolmore’s Tom Magnier from the Lime Country Thoroughbreds draft, the most expensive progeny of the late Arrowfield stallion at the Sydney sale that year.

He is out of the US-bred mare Aloona (Smart Strike), who was raced by Jean-Pierre-Joseph Dubois to win a race in France, with Northern Beaches a half-brother to Todman Stakes (Gr 2, 1200m) winner Aylmerton (Siyouni) and the stakes-placed Arnaqueur (Astern), both trained in Australia by Dubois’ son, Jean-Etienne.

Aloona died in December last year. Her final foal of five is a two-year-old filly by Snitzel (Redoute’s Choice).