Not A Single Doubt colt speeds to Valley track record 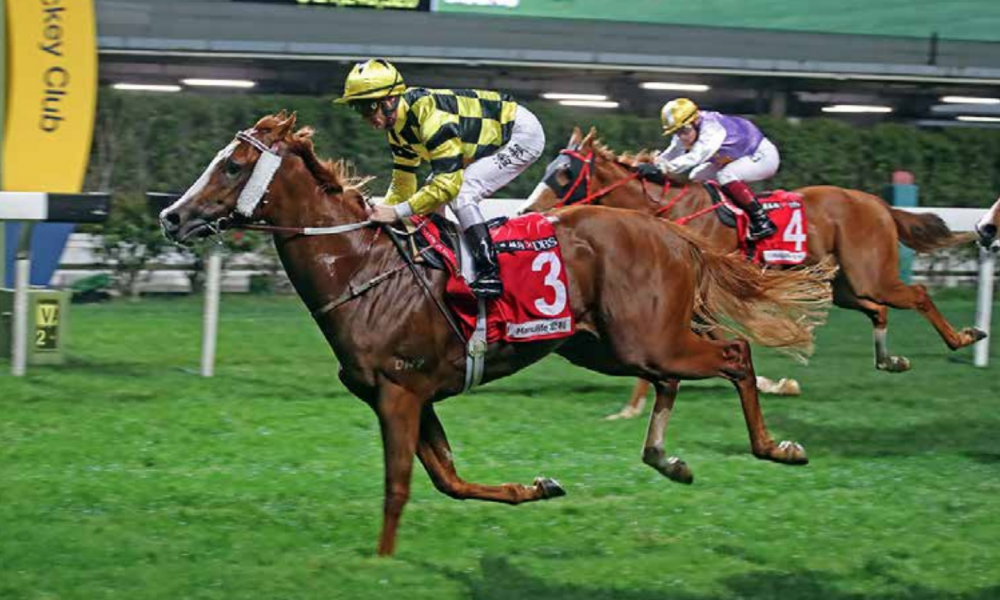 Stronger (Not A Single Doubt) found his Hong Kong feet in fine style at Happy Valley on Wednesday, blitzing the Class 3 Fanling Handicap (1000m) in a track record time of 0.56.11.

The Not A Single Doubt (Redoute’s Choice) colt arrived in town with a smart juvenile profile from his time in Australia, having landed a Group 3 contest at the Gold Coast on his final start before import. And the three-year-old repaid the faith of trainer John Moore with his local breakthrough on Wednesday.

“He wasn’t cheap because he’s a good looker and he’s still an entire because he’s got a great disposition. George (Moore, son and agent) and I actually bid on him back when he was a yearling but we stopped because he ended up going for about $1.1 million,” Moore said.

“He’s a handy horse otherwise he wouldn’t be in Hong Kong. He’s here because they (the previous connections) didn’t see a lot of upside but we hope we can take him well up into Class 2 and then into the bottom of Class 1. I still think there’s some upside.”

Champion jockey Zac Purton got a smart break out of Stronger from gate two and opted to stalk the front-running Multimillion (Tycoon Ruler) on the fence. His mount loomed up powerfully on that rival’s near flank when switched out at the top of the straight.

“Zac got off and said that was easy,” Moore added, having watched his charge sprint away to a cosy length and three-quarter win.

“He said that in the gate tonight he was really quiet for an entire; he jumped smartly and had the gun run all the way.

“It was just how much gas was left in the tank at the corner? He just quickened really nicely. I think we’ve got him in the right place now – there’s another two wins in him this season. He won facile today.”

Subsequently trained by Peter and Paul Snowden for a partnership that included Harron’s colts syndicate, Stronger won three of his seven starts in Australia, including the Ken Russell Memorial Classic (Gr 3, 1400m) last May.

Purton snared a double on the night, having taken his strike-rate this season for trainer Benno Yung to 26 per cent when Amazing (Medaglia d’Oro) became his fourth winner for the stable. The Australian delivered the 21-race maiden with a late inside run to nick the opener, section two of the Class 4 Sai Kung Handicap (1200m), by a short-head.

The four-year-old had been unplaced at each of his five previous starts, which included running last of 14 at Sha Tin on his most recent outing. But the grey – unbeaten in two outings in Queensland pre-import – put those reversals behind him on his first start at the Valley with a half-length score in a time of 1.09.14.

“I think the key is that he travelled really smoothly,” Poon said. “His last couple of starts he fought and used his energy early and couldn’t finish.

“Mr. Size decided to bring him to Happy Valley over 1200 metres and this time there was good speed and he travelled really well. He was breathing very well, he was smooth, and that’s why he could hit the line.

“He ran a good time, so he just needs the race to be smooth so he can get a rhythm and then he will be able to show this ability again.”

There was more Queensland form on show when Heavenly Thought (So You Think), runner-up to Dark Dream (All American) in the 2018 Queensland Derby (Gr 1, 2200m) and now under the watch of trainer Frankie Lor, finally broke his Hong Kong duck. The five-year-old took section one of the Class 3 Kwai Chung Handicap (1650m) under premiership leader Joao Moreira.

Moreira completed a race-to-race brace aboard Farshad (Kendargent) in the night’s penultimate contest, section two of the Class 3 Kwai Chung Handicap (1650m). The Me Tsui-trained grey was another to earn a first Hong Kong win.

Bulb Elite (Iffraah) also broke his Hong Kong maiden – at the 25th attempt – in the Class 4 Tai Po Handicap (1650m). The Dennis Yip-trained six-year-old had dropped to a career-low rating of 43 and plugged on dourly from a handy spot under Alexis Badel to hold off race-favourite Everyone’s Elite (Dalakhani).

Grant van Niekerk made the most of a spare pick-up when he filled in aboard Takingufurther (Exceed And Excel) in section one of the Class 4 Sai Kung Handicap (1200m) after Keith Yeung was ruled out due to sickness. Van Niekerk took the five-year-old to the lead and was never headed in posting an easy three and a half-length win – trainer Jimmy Ting’s first for the month.

Acclaimed Light (Acclamation) relished the good tempo in the Class 4 Tsuen Wan Handicap (1800m), so much so that he surged away to a two and three quarter-length win in a class-record time of 1.48.10. The eight-year-old’s success marked jockey Neil Callan’s fourth win for the Paul O’Sullivan stable this term, at a strike rate of 23 per cent.