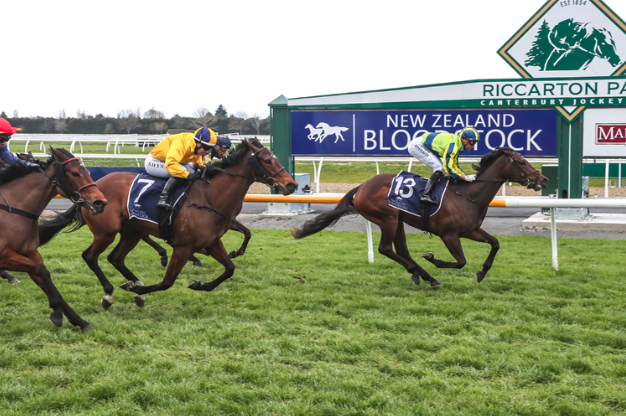 One Kiss earned a shot at the New Zealand 1,000 Guineas (Gr 1, 1600m) when showing marked improvement to win the Canterbury Belle Stakes (Listed, 1200m) at Riccarton on Saturday, a performance earning ANZ Bloodstock News’s Maiden of the Week recognition.

The Tivaci (High Chaparral) filly came home with a scintillating run from midfield under Opie Bosson to win by three-quarters of a length from Perfectly Suited (Savile Row) and Kikimora (Shamexpress), and in the process became the third individual stakes winner for her Waikato Stud-based sire.

“She’s a really progressive sort of filly and that was a good effort to win a stakes race second-up,” her trainer Mark Walker said.

“It was a lovely ride by Opie and she’s still got improvement to come as we look at a possible tilt at the Group 1 here during Cup Week.”

A seventh place finish in a Taipo maiden on last month’s debut, at face value, would not command a step up in grade to stakes level for a next start, but Walker, along with owner-breeder Lib Petagna, were in no doubt as to One Kiss’s ability, despite a less than impressive beginning.

Bruce Perry, who manages Petagna’s racing and bloodstock stock, credited the training team at Te Akau for her early success.

“Mark’s done a really good job with her. Jamie Richards always rated her and said she was a nice filly,” Perry said.

“She had trialled really well and we backed the expertise and opinion of those people at Te Akau Racing.”

Petagna, who recently purchased the formerly named Valachi Downs Stud in Matamata, rebranding it Elsdon Park, bred One Kiss having acquired her dam, Discreet Evening, following her purchase for US$28,000 by New Zealand Bloodstock from the 2013 Keeneland November Breeding Stock Sale. She was put in foal to Savabeel (Zabeel), with the resultant filly foal being Listed winner Santa Catarina.

One Kiss is the most recent of three foals for Discreet Evening, all fillies.

“It’s nice to get black type with a filly so early in her career and, along with her Savabeel half-sister Santa Catarina, she’s the second stakes winner from the mare [Discreet Evening].

“We’ve still got Santa Catarina and Discreet Evening, who unfortunately is proving difficult to get in foal.”

A multiple winner in the US, Discreet Evening is a half-sister to stakes race winner and Grade 1 placed Great Notion (Elusive Quality).