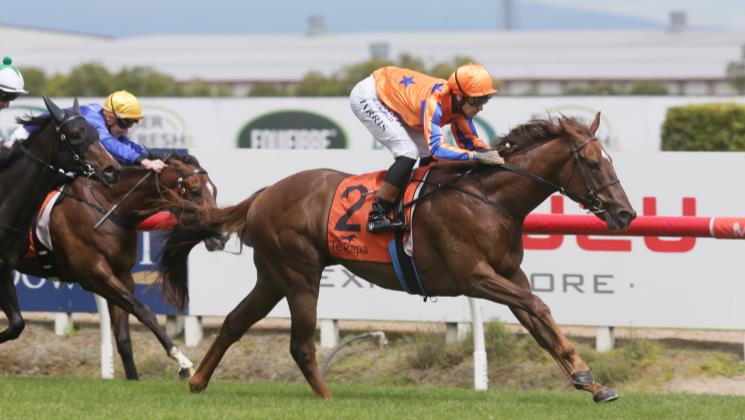 Following two trial successes, the Jamie Richards-trained Palamos (2 c Extreme Choice – Unrevealed by Forest Wildcat) was sent off a warm favourite for his debut and fully justified his odds with an impressive performance at Te Rapa.

Ridden by Troy Harris, Palamos settled fourth in the field of nine and pulled out to challenge into the straight, but ran around until the 200–metre pole.

Once he got his mind on the job, Palamos cruised up alongside the two leading horses and drove clear convincingly at the 100–metre marker to win by two lengths in a sharp time of 58.35 seconds.

The Glen Harvey-trained Miss Ipenema (Sacred Falls) ran into second after setting the pace with King Of Reds (Burgundy), who finished close behind in third.

Victory put Palamos near the top of the qualifying table for the Karaka Million 2YO (1200m) at Ellerslie in January and the Te Akau Racing team were delighted with his race day debut.

“He’s a nice horse who had impressed us at home and who had trialled up very well beforehand,” Richards said.

“We thought he could go close and it was a good win as Troy tucked him in nicely behind them and brought him out at the right time in the straight.

“Troy is exceptionally good at educating the younger horses and this colt will learn a lot from today.

“He can go in the paddock now for a couple of weeks, put some weight on and then we can put a programme together to get him to the Karaka Million.

“That win should be enough to qualify him, which is great as with the money in the bank early on, we can afford to pick and choose just where we take him to get him to the race.”

Palamos is the son of first season sire Extreme Choice (Not A Single Doubt), who landed the Blue Diamond Stakes (Gr 1, 1200m) and Moir Stakes (Gr 1, 1000m) during an impressive career. Extreme Choice had his first two winners on Saturday, with Tiger Of Malay joining Palamos in the winners’ enclosure following a maiden victory at Randwick. Palamos’s dam Unrevealed (Forest Wildcat) won four of her 22 starts in Japan.

Palamos is raced by Hong Kong-based businessman Edmund Wong, who became involved with the Te Akau Racing operation after contacting David Ellis, who bought him for $85,000 at the 2020 New Zealand Bloodstock National Yearling Sale.

“This is the first horse we’ve started for Edmund Wong, who lives in Hong Kong, and it’s a real honour to have horses in training for him,” Ellis said.

“He rang me out of the blue one day and asked me to buy a weanling for him.

“I had trouble deciding between three and he had me buy them all. Although not early two-year-olds, they are all showing something.

“I then bought this yearling, which he liked, and I recently bought the full-brother to Werther for him as he also owns the mare.”

Wong took his first step into the breeding side of the industry through the private sale purchase of blue-hen mare Bagalollies (Zabeel), the dam of former Hong Kong Horse of the Year Werther (Tavistock) and his stakes performing siblings Gobstopper (Tavistock), Milseain (Tavistock) and Toffee Tongue (Tavistock).