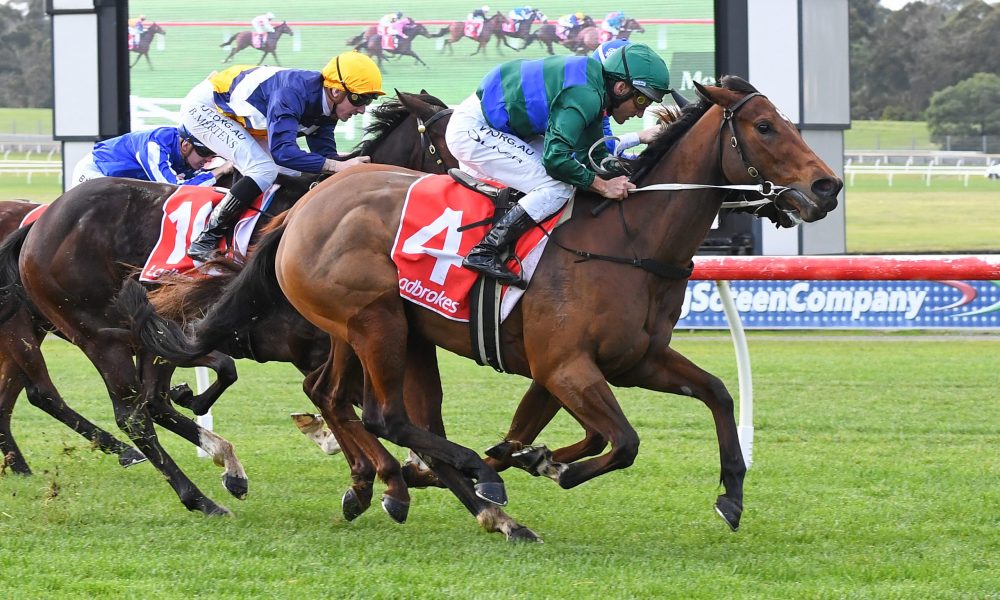 2 f I Am Invincible – Roulettes by Flying Spur

Telemon Thoroughbreds would have been glued to Sandown on Wednesday when Parlophone (I Am Invincible) attempted to break her maiden at her third attempt.

They would have been thrilled to see the Mick Price and Mick Kent Jnr-trained Parlophone score a first win, sweeping home from near the rear to defeat Peggy Selene (Rubick) right on the wire and earning ANZ Bloodstock News’ Maiden Of The Week in the process. Zesty Belle (Denman) was third, a further half-length away.

It was a contrast of styles compared to Parlophone’s last start at Flemington in January, when she led over the straight 1100 metres before being run down by subsequent Blue Diamond Stakes (Gr 1, 1200m) placegetter Personal (Fastnet Rock). That in itself came after she tried to buck on debut at Flemington on New Year’s Day – a trait that almost brought her undone again on Wednesday.

“Mick’s been really happy with her, she’s trialled well,” Kent said. “Actually, at her first start, she bucked out of the barriers and was beaten 20 lengths, it was a non-event. But today I was really worried, because at the start of the race, she did it again for a few strides.

“It’s very unusual but she’s fine at home. She was really good, she was in a bad spot but she finished really strongly. It was a good race today for a midweek race in June. It was a really good effort and she’s still got plenty of improvement, she’s still dull in the coat. We’ll try to get her rating up and then we’ll look to add some black-type in the spring.”

Bred and raced by Geoff Walsh, in conjunction with long-term partners Lindsay Maxsted and Simon Tuxen, Parlophone is the fourth named foal out of Roulettes, who was also bred by the same collective. Roulettes won the St Albans Stakes (Listed, 1000m) in 2009 and is a half-sister to two-time Group 3 winner Royal Discretion (Royal Academy).

In addition to Sun City, Roulettes has produced Spin (I Am Invincible), placed in four stakes races at two and three in Australia before heading to Singapore, where he is now named Star Of Jupiter.

She has a Deep Field (Northern Meteor) yearling colt who was purchased by Alan Bell for $800,000 at this year’s Magic Millions Gold Coast Yearling Sale, while she is currently in foal to Dundeel (High Chaparral).