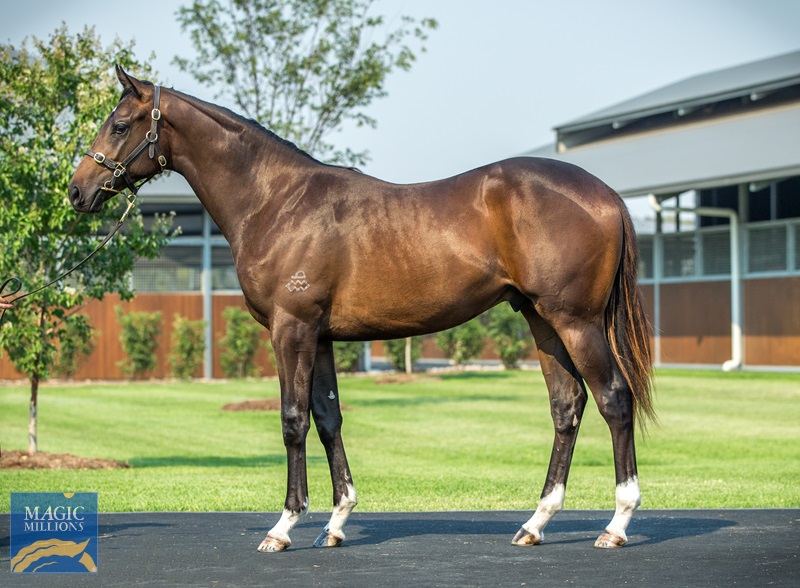 After a hat-trick of impressive trial wins, Profondo started as the easy-to-back $3.60 second favourite. However, he always travelled well in the middle of the pack for jockey Robbie Dolan and ran on smartly when asked for an effort, beating Mokulua (Redoute’s Choice) by a comfortable head-winning margin. The pair pulled clear of French Emperor (Tavistock) who was a further length and a half back in third.

“We thought we presented him well and he showed that today,” said trainer Richard Litt. “I thought he hit the line well and he’ll take a lot of improvement out of that for sure, because 1400 metres first up is not easy for any horse, but he seemed to handle it well, so it will be onwards and upwards.”

The son of Deep Impact (Sunday Silence) was the sale topper at the 2020 Magic Millions Gold Coast Yearling Sale when he was sold to Ottavio and Wendy Galletta of Galletta Construction Co for a huge $1.9 million from the draft of breeders Arrowfield Stud, and Dolan had high praise for the three-year-old after his win.

“He came off the bit there and just got a bit lost with the horses around him but stuck his nose out right through the line. Even a furlong after the line he was strong so he will get further again. He is up there with the best young horses I have sat on. For him to do that and still be very green, he definitely has a lot of upside,” Dolan said of his mount.

Honesty Prevails, herself a $720,000 yearling purchase for Arrowfield Stud, had her second foal, a colt by Shalaa (Invincible Spirit), sell to James Harron Bloodstock for $1.15 million at the Magic Millions Gold Coast Yearling Sale earlier this year, and she has a yearling colt by Arrowfield stallion Dundeel (High Chaparral).