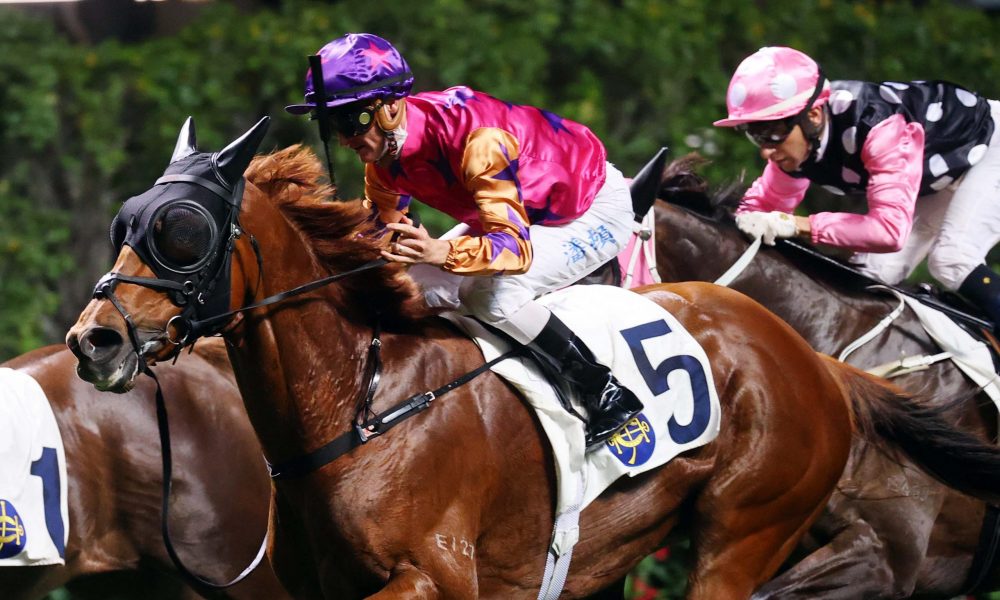 Three days after Moreira moved into triple figures, Purton reached the seasonal benchmark he routinely seeks with a signature ride aboard Richard Gibson’s Viva Mama (Dream Ahead) in the first section of the Class 5 Percival Handicap (1000m).

“That’s a target at the start of every season, to get to 100,” said Purton, who has now achieved the mark in seven of the past nine seasons. “If you ride 100 winners, you’ve had a very good season here. We’ve got there now, so hopefully there’s a few more winners to come.”

Having briefly lost the championship lead to Purton, Moreira regained the ascendancy with a supreme rail-hugging display aboard the Caspar Fownes-trained Nearly Fine (Exosphere) to win the second section of the Class 4 Morrison Hill Handicap (1650m), leaving Fownes with 998 Hong Kong career winners.

“He’s a smart little horse,” Lor said after the three-year-old’s third win from six starts. “He is very quiet in the mornings and is good to deal with. I hope he has a good future. He’s done a good job from the barrier (12) tonight.”

Moreira continues his quest for a fifth title, clasping a 103-101 lead over Purton, while Size and Lor remained locked in a similarly tight battle – 64-62 – for the trainers’ championship.

Matthew Chadwick extended a stunning season with a double, starting with success on the Tony Cruz-trained Street Scream (Street Boss) in the first section of the Class 4 Matheson Handicap (1200m).

Hampered by injuries over the past four seasons, Chadwick is riding with the flair and conviction which marked a prodigious rise at the start of his career, completing a brace atop Douglas Whyte’s Smiling City (So You Think) in the second section of the Class 4 Matheson Handicap (1200m).

Entrenching himself in fourth spot in the jockeys’ championship with 38 wins for the season so far, Chadwick is bearing down on his career-best haul of 57 victories, set in the 2012/13 season when he finished third behind Whyte and Purton.

“He’s been unlucky this horse and he’s not an easy ride and dropping back to 1200 metres makes it lot less complicated,” Whyte said before sealing a double with Purton and Nothing New (No Nay Never) in the Class 3 Canal Handicap (1650m) to take the night’s training honours.

“Nothing New had no right to win, he had such a tough run. The plan was to go back but he begins so well and makes it hard for himself. Zac was able to find cover three-wide and the horse did a fantastic job.”