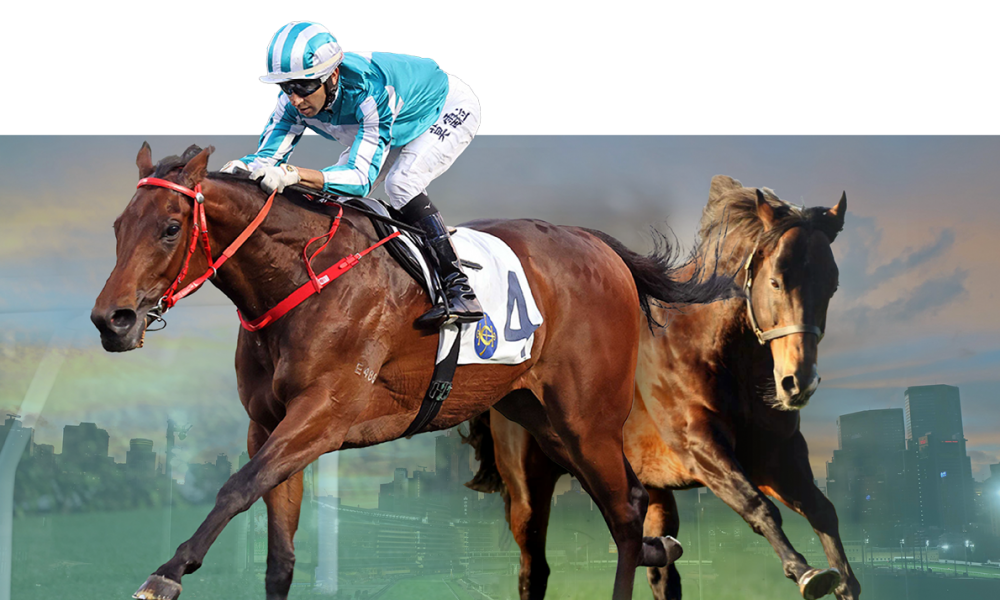 Romantic Warrior (Acclamation) announced himself as the potential next superstar of racing in Hong Kong when he earned his seventh win in eight starts and became just the fifth horse to back up victory in the Hong Kong Derby (Listed, 2000m) with success in the QEII Cup (Gr 1, 2000m) on Champions Day at Sha Tin on Sunday.

The Danny Shum-trained four-year-old was sent off the odds-on favourite ahead of recent Hong Kong Gold Cup (Gr 1, 2000m) winner Russian Emperor (Galileo), and ran out a comfortable two-length winner under Karis Teetan ahead of a blanket finish for second, led by Tourbillon Diamond (Olympic Glory) from the fast-finishing Panfield (Lookin At Lucky), Ka Ying Star (Cityscape) and Russian Emperor in fifth.

The win marks a remarkable rise for Romantic Warrior, who became the first graduate of the Hong Kong International Sale to win the Derby last month and joined Vengeance Of Rain (Zabeel) (2005), Ambitious Dragon (Pins) (2011), Designs On Rome (Holy Roman Emperor) (2014) and Werther (Tavistock) (2016) in winning both the Derby and QEII Cup in the same season.

“The Derby was very special for all of us,” said Teetan in the aftermath of the race. “This race we thought was a good plan with no international horses coming but we had in mind that he’s a bit younger than the other horses – but he’s better than all of them so he proved what kind of horse he is today. Danny and his team have done a great job.”

Shum picked out Romantic Warrior from the Hong Kong International Sale when he purchased the gelding for owner Peter Lau for HK$4.8 million, with the HKJC’s European bloodstock agent Mick Kinane having first selected the son of Acclamation (Royal Applause) at Book 2 of the Tattersalls October Yearling Sale for 300,000gns from the draft of breeders Corduff Stud.

However, Shum, who trained the first two home courtesy of Tourbillon Diamond, admitted his surprise at the progression of the horse, who began his career with victory in Class 4 company at Happy Valley on October 20 last year, with his only blemish to date coming when caught wide in the Hong Kong Classic Cup (Listed, 1800m) and going down in fourth behind the winner California Spangle (Starspangledbanner).

“I feel great and happy to see the horse steadily improve and I’ve always loved his manner, but his manner is getting better and better,” the trainer said. “He’s very easy to train. He’s a very nice horse. He’s a superstar.

“He’s surprised me. When I bought him for Mr Peter Lau, I thought he was a nice horse – that’s all I could say. I thought in the Hong Kong International Sale he was the best horse but I didn’t know how good he was.

“I’m very happy for the owner, he has encouraged me to do better and better.”

The result is the first Group 1 success in Hong Kong for 23-year-old Rathbarry Stud stallion Acclamation, who, despite being in the twilight of his career at stud, continues to be represented at the highest level by his progeny, both at home in Ireland and Great Britain and overseas.

“It’s always fantastic and he’s still covering away at 23 years of age,” said Niamh Woods, director at Rathbarry Stud. “His fertility is still very good but it’s great to have a Group 1 winner coming out.

“Romantic Warrior is just a four-year-old coming out now and he just adds to the roster of multiple Group 1 winners that Acclamation has sired, so it’s wonderful and we’re thrilled to bits.”

An aspect which might come across as surprising is Romantic Warrior’s affinity for 2000 metres with Acclamation, a Group 2 winner over six furlongs in Britain and who on his final career start finished fifth in the Hong Kong Sprint (Gr 1, 1200m) on the International raceday, having his other five elite-level winners coming at distances of a mile or below, while Romantic Warrior is just one of five from 62 stakes winners to have recorded black type victories at a distance 1800 metres or above.

“They seem to be very progressive (in Hong Kong), and his trainer in particular is very intuitive to Romantic Warrior so he knew what he was capable of,” Woods said. “So to see him win over different distances is wonderful as it shows both the versatility of the horse and also Acclamation and Folk Melody, the dam of Romantic Warrior, that they can get them sprinting or over that bit more of a distance.”

Although Romantic Warrior represents his first elite-level winner in Hong Kong, Acclamation’s record of 20 winners from 28 runners stands out at a 71 per cent strike rate, while he also counts Sha Tin Listed winner Sparkling Power among his progeny.

Bred by David and Henrietta Egan’s Corduff Stud in Ireland, Romantic Warrior is out of the Street Cry (Machiavellian) mare Folk Melody, a maiden winner at Newmarket and daughter of Canadian Grade 1 winner over 2000 metres Folk Opera (Singspiel). Folk Melody was a €82,000 purchase for Blandford Bloodstock out of the Godolphin draft at the Goffs November Breeding Stock Sale and has produced three winners from three runners, while she has an unraced two-year-old colt by Showcasing (Oasis Dream) who was purchased by trainer Byran Smart for 160,000gns at the Tattersalls October Book 2 Yearling Sale.

“His second dam is by Singspiel and Folk Melody herself is by Street Cry, and she’s bred three winners now. It’s wonderful for Corduff because they have been huge supporters of Acclamation for the past number of years, so it’s great for them that it’s progressing,” Woods continued.

“The mare is young as well, she’s only 11, so she’s doing a fantastic job for them.”

While Acclamation continues to have crops of yearlings coming through at the sale, Woods believes the exploits of Romantic Warrior, who bucked a seven-year sequence of southern hemisphere-sired winners of the Hong Kong Derby, will not only boost the stallion but also result in Hong Kong buyers looking to the yearling markets in Europe to source their future racing stock.

“It has to be something to really get excited about,” Woods said. “Through (Romantic Warrior) they’ve proven now that they can come out and do it and there’s been a few more bar Romantic Warrior that Mick (Kinane) has been involved with, and that can only be a positive as they look towards the European horses and say ‘we’ve had success here, why not go again and purchase a few more?’”

Rathbarry, which stands ten stallions for both jumping and on the Flat, is welcoming the third two-year-old crop of Kodi Bear (Kodiac) this northern hemisphere season.

The stallion finished second behind Mehmas, a son of Acclamation, in the 2020 first season sire standings in Great Britain. With his oldest progeny just turned four, he has two runners based in Hong Kong, including the formerly Middleham Park-owned maiden winner Gin O’Clock who is in training with David Hayes.

“Kodi, in particular, will have a few types which I would think would suit Hong Kong,” Woods said. “It depends on the lads that purchase them but hopefully, the likes of Mick and any other agents that purchase them and take them over, they can do well.”