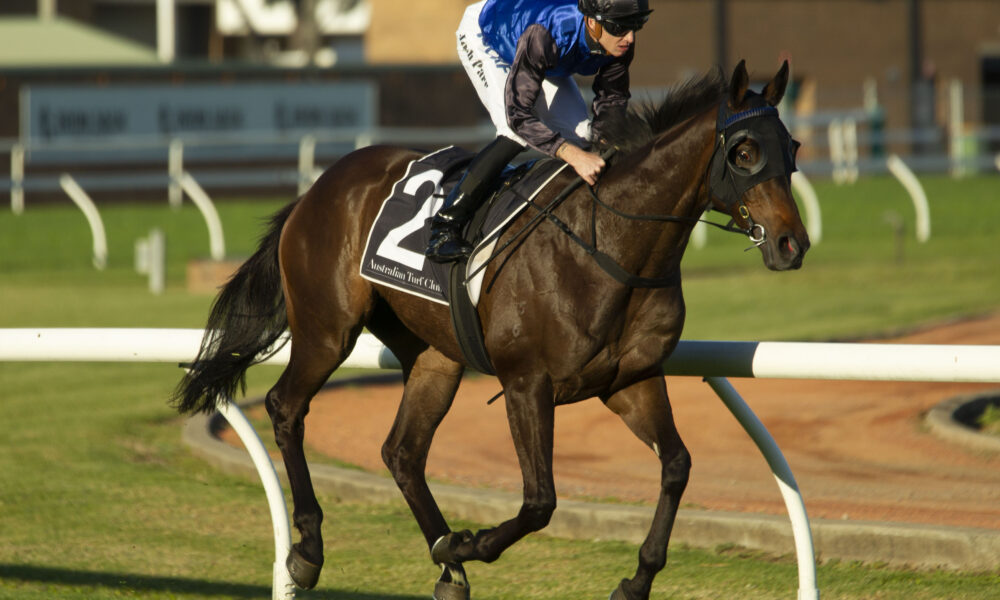 Beyond that race, which his trainer Mark Newnham won last year with Maid of Heaven (Smart Missile), Shadow Hero has a date in Melbourne on November 2 for the Victoria Derby (Gr 1, 2500m) for which he is already also a short-priced favourite. A relaxed gelding looks a genuine stayer with a real turn of foot, Shadow Hero, like his sire Pierro (Lonhro) needs blinkers to produce his best and seemingly has great improvement still to come which makes him a horse with an exciting future after only five race starts. As favourite last Saturday after his fast closing fourth first-up in the Dulcify Stakes (Listed, 1500m) on September 14, Shadow Hero was well back early and moved up to challenge the leaders in the straight before jockey Josh Parr took him to the front 200 metres out before running away to win by three and a quarter lengths over Godolphin’s Subedar (Sepoy) with Quick Thinker (So You Think) another length away in third place just ahead of second favourite Just Thinkin’ (So You Think). Race time was 1:49.10 with the final 600 metres run in 36.57. Shadow Hero is living up to the potential he revealed in two performances during the Queensland Winter Carnival in June when he won the BRC The Phoenix (Listed, 1630m), before posting a fast-finishing fourth in the JJ Atkins Stakes (Gr 1, 1600m), charging home from 14th on the home turn. A $260,000 buy from the Newgate Farm consignment at last year’s Inglis Classic Yearling Sale in Sydney, Shadow Hero was purchased in the name of Sweetbriar Equine whose owners David Lui and Karl Chen are based in Hong Kong. It is fitting to see that Shadow Hero’s breeder is Lightning Thoroughbreds, the stud name used by Greg and Donna Kolivos who raced his champion father Pierro. The Coolmore-based stallion has started off the 2019/20 racing season in spectacular style with a flurry of good winners including four stakes winners. His season could hit new heights, with his son Pierata and daughter Arcadia Queen among the favourites for the $14 million The Everest (1200m) on October 19 and Shadow Hero is surely headed for more big race success which should give Pierro real shot at becoming Australia’s champion sire this season. Greg and Donna Kolivos paid $700,000 for Shadow Hero’s Group 3-winning dam Sookie (Casino Prince) at the dispersal of Nathan Tinkler’s Patinack Farm just days after the mare’s biggest win in the Glenlogan Park Stakes (Gr 3, 1350m) and she has proved a good breeder. Sookie had a good deal of racing