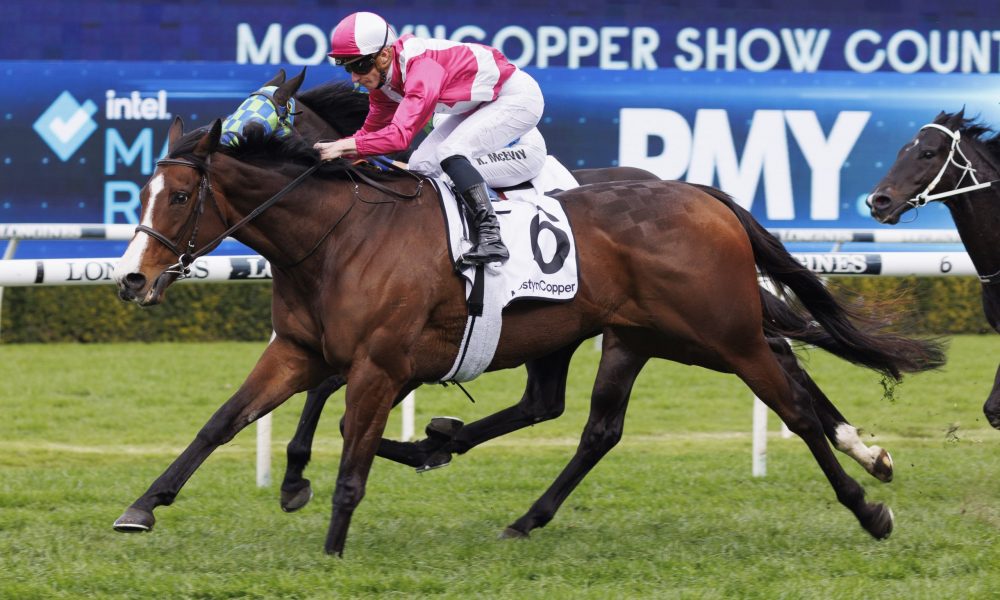 Showcasing, the son of Oasis Dream who won York’s Group 2 Gimcrack Stakes, shuttled for seven seasons to Karaka’s Haunui Farm, where he stood for between $7,500 and $12,000.

Right now, he commands the fifth-highest advertised service fee in Great Britain, standing at Whitsbury Manor Stud in Hampshire for £45,000, or around $85,000 in today’s money.

The numbers fairly clearly reflect his comparative success in each hemisphere, a situation that led to him dropping off the shuttle after 2017.

In Britain, the Juddmonte-bred 15-year-old has had a solid 245 winners from 508 runners, with 15 individual stakes winners, including three individual Group 1 victors. They’re headed by Advertise, who won at Royal Ascot, Ireland and France, where he was joint champion older male sprinter in 2019. Dual elite-level winner Quiet Reflection was champion three-year-old sprinter in Europe and Britain in 2016, while Mohaather, who claimed Goodwood’s Sussex Stakes, was Britain’s champion older male miler in 2020.

In Australasia, Showcasing’s brightest moments have been six Group 2 wins in New Zealand shared by four runners: Showoroses, who won three of them, Play That Song, Xpression and Showboy.

But the 15-year-old’s antipodean fortunes could be about to take an upswing – injuries willing – through the form of Showmanship, who, if he stays fit, appears set for a strong spring.

The fact he’s just turned seven and was having his tenth start – and only his second in 101 weeks due to suspensory trouble – illustrates more than a fair share of injury issues. But the consequence that meant the strongly-built gelding needed to carry just 54.5 kilograms on Saturday also augurs well for his chances of adding more riches – for himself and his sire – in the near future.

He’s now prominent in the market, at around $11, for Melbourne’s spring handicap sprint highlight, the Sir Rupert Clarke Stakes (Gr 1, 1400m), and is $15 for the 200 metre-longer Group 1 Toorak Handicap, also at Caulfield.

Success in such events for the bay – who won five of his first six in Perth and then two in Melbourne in the 2020 spring for Grant and Alana Williams before a permanent transfer east to Danny O’Brien – would be vindication for Haunui Farm’s original pursuit of his sire, if a tad late.

“We liked Showcasing because he was a nice sharp horse. We had bred from a mare from his family, so we knew who was in the family,” Haunui’s managing director Mark Chitty tells It’s In The Blood.

“He’s by Oasis Dream who was by Green Desert, and Volksraad, another son of Green Desert, had done very well as a sire in New Zealand,” he said of the country’s six-time champion sire.

“We were able to syndicate our 50 per cent of him down here, so it was good for a lot of smaller mare owners. People who had between one and six mares like to go into a stallion like that, and that gave them a bit of opportunity. He could get horses up early and they could train on.

“And he did a good job. He got mares going and got them started. But the fact of the matter is he’s done better in the northern hemisphere than the southern. He’s certainly seemed to have upgraded his mares well in Europe, and clicked better with mares there in terms of his success rate. He’s had three Group 1 winners up there, and none down here yet. But maybe Showmanship will be the first.”

To be fair, when it comes to British flops in the far south, Showcasing wasn’t exactly Scott of the Antarctic. He topped New Zealand’s first season and two-year-old sires’ tables in 2014-15, albeit with small numbers, but two of his four winners tasted stakes success. And he was fifth on the country’s general sires’ table for two seasons running from 2018-19, with winners-to-runners of 44 from 103 and 39 from 108.

Showmanship came to be after Chitty looked across the Tasman to buy the Don Eduardo mare Khales from Gooree Stud, through Michael Otto Bloodstock, at an Inglis sale in 2008. She cost just $7,500 – indicative of a sixth of 11 at her only start for John Hawkes at Hawkesbury – but Chitty had his reasons.

“We stood Don Eduardo many moons ago, and Khales was from one of their [Gooree’s] good, solid, hard-hitting families,” he says. “Don Eduardo wasn’t a very successful stallion but was a very good looking horse and very well bred.”

Making matters more attractive, Khales was out of a Danehill mare, always a boon for New Zealand breeders.

“There’s not a lot of Danehill sires over here,” Chitty says, “so that opens you right up if you have a Danehill-line mare. Their stock generally come on a little quicker, they’re more physical, and there’s a nice blend of blood across your traditional New Zealand-breds.”

Chitty says the Showcasing-Khales cross was particularly appealing on physicals, but also brought a few pedigree tricks. One standout was the 5Sx5D double-up of Courtly Dee (Never Bend), America’s broodmare of the year in 1983, who threw no fewer than three individual Group 1 winners.

Her first foal, in 1974, was Ali Oop (Al Hattab), winner of Monmouth Park’s Sapling Stakes. Seven foals later, in 1981, she threw Althea (Alydar), winner of six Group 1s, the Eclipse Champion Two-Year-Old Filly, and a beaten favourite in the Kentucky Derby. And two years after that she threw Ketoh (Exclusive Native) winner at the elite level in the Cowdin Stakes at Aqueduct.

Courtly Dee runs into Showmanship as Green Desert’s second dam, and through the female line as Showmanship’s fifth dam.

And Precious Glitter’s dam – and the taproot for Showmanship’s family – was US-bred Rush For Gold (Quack), who also threw Beauty Watch (Belong To Me), a Group 3 Hawkesbury Gold Cup winner and three times Group 1-placed.

“Khales is a big mare, about 16.2 hands, and a bit softer-bodied,” Chitty says. “And because of her pedigree, she was quite a nice mare to be able to mate back across a lot of different stallions.”

Chitty struck with his first try, putting Khales to the then Haunui stallion Elusive City (Elusive Quality) to produce Bahana. An $80,000 buy at the 2013 NZB Select Yearling Sale, he became Singapore’s Champion Stayer in 2016, and won seven races including a Singapore Gold Cup.

Next came three covers in four years by Showcasing. The second produced La Mouline, a filly who was Group 3 placed among two thirds in New Zealand before a transfer to Perth, where she won six of seven for “Picket Fence” Peters, alongside a narrow second. (Funny thing: that second was behind a mare named Showcase, who was by none other than… Big Brown).

Showmanship was the third full sibling, a $145,000 purchase from the 2017 NZB Select Yearling Sale by John Chalmers Bloodstock, who followed La Mouline into Peters’ ranks.

And after dropping a filly by Super Easy (Darci Brahma), a fourth visit by Khales to Showcasing resulted in a yearling colt who could be called the pick of the litter. He sold for $500,000 – the seventh-highest price of Karaka Book 1 in 2020 – to Ciaron Maher. He’s now known as Golden Vitrine, and he’s about to resume after a second-start second at Pakenham to Star Patrol (Starspangledbanner), a subsequent dual Flemington winner.

Haunui no longer owns Khales. She was sold to breeder Tom Lane for $8,500 at an NZB sale in 2016 in foal to Super Easy. But she still resides at Haunui, where she’s about to drop to Per Incanto, and Chitty has bought into two of her female offspring.

That Super Easy filly was snapped up online by Chitty for $800 and is now Super Tui, an unraced six-year-old mare about to foal down to Ribchester, one of Haunui’s two Darley Europe shuttlers. The other – Belardo – sired Khales’ filly Vivaldo, a $100,000 yearling Chitty also bought into, who’s had two trials for Roger James.

With breeding prospects from the family, Chitty will be watching Showmanship’s progress very closely this spring.