Six for Spill The Beans 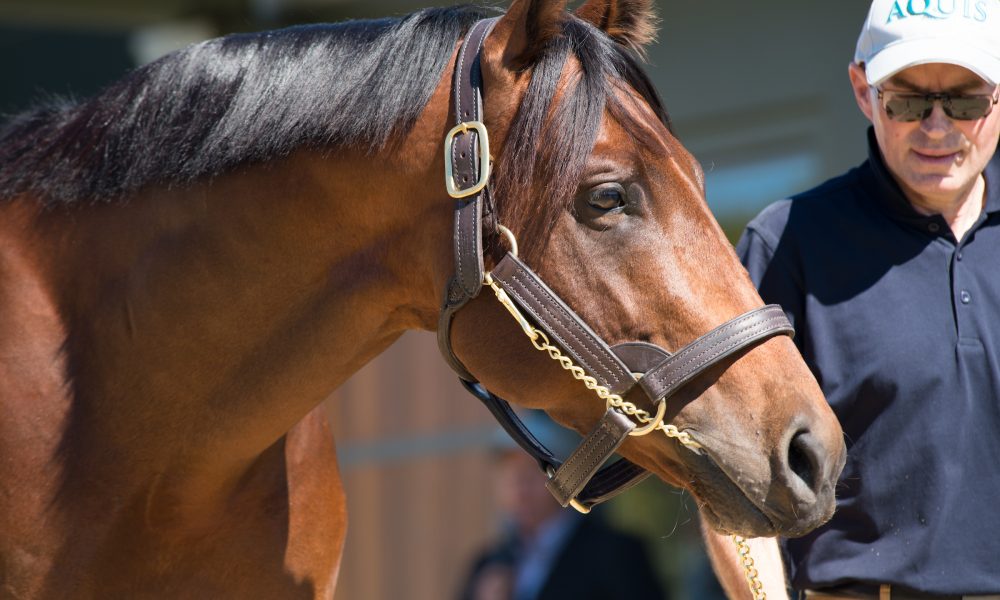 Spill The Beans – Aquis Farm’s late first season sire Spill The Beans (Snitzel) landed his sixth winner on Tuesday when Courtesy Bus (2 c ex Falvesa by Falvelon) took out the QTIS 2YO Maiden Handicap (1200m) at Mackay. The Jared Wehlow-trained colt produced a dominant victory, coming home two and a half lengths ahead of Colour Perfect (Star Witness) with I Feel Real (Real Saga) a further two lengths back in third. Spill The Beans, who died in November last year, is currently second on the leading first season sire by winners and earnings behind Coolmore’s Pride Of Dubai (Street Cry).

Not A Single Doubt – Arrowfield Stud’s recently retired stallion Not A Single Doubt (Redoute’s Choice) landed his 12 individual Group 1 winner on Saturday when the Gai Waterhouse and Adrian Bott-trained Farnan (2 c ex Tallow by Street Cry) took out the Golden Slipper Stakes (Gr 1, 1200m) at Rosehill. The son of Redoute’s Choice (Danehill) had enjoyed a terrific career in the breeding barn but was retired from mating duties in January due to respiratory issues. He stood for a career-high fee of $110,000 (inc GST) in 2019

Pivotal – Cheveley Park Stud’s Pivotal (Polar Falcon) sired his 31st individual Group 1 winner on Saturday when the William Haggas-trained Addeybb (6 g ex Bush Cat by Kingmambo) won the Ranvet Stakes (Gr 1, 2000m) at Rosehill. The six-year-old British raider fought hard to the line to edge out Chris Waller’s Verry Elleegant (Zed) by half a length, with last year’s winner of the race and fellow son of Pivotal, Avilius, finishing over five lengths away in third. Addeybb will now head towards the Queen Elizabeth Stakes (Gr 1, 2000m) at Randwick on April 11. Pivotal stands at the Newmarket stud for a Private fee in 2020.

Snitzel – Not A Single Doubt’s former barn mate Snitzel (Redoute’s Choice) also sired a new Group 1 winner at Rosehill on Saturday, taking his tally to 14, as I Am Excited (5 m ex Lady Beckworth by General Nediym) landed the Galaxy Stakes (Gr 1, 1100m). Snitzel stood for a fee of $220,000 (inc GST) in 2019 and is currently the third overall leading sire in Australia by earnings and winners. I Am Excited joins fellow star sprinters Redzel, Trapeze Artist and Russian Revolution as Group 1 winners for their sire.

Brazen Beau – Brazen Beau (I Am Invincible) registered his seventh individual stakes winner when Larimer Street (2 c ex Original Choice by Redoute’s Choice) built on his promising earlier form to take out the Valley Pearl Stakes (Listed, 1200m) at Moonee Valley on Friday night. Trained by Trent Busuttin and Natalie Young, Larimer Street finished three-quarters of a length in front of Vangelic (Vancouver), who just got the better of Pioneer River (Snitzel) in their battle for second. Larimer Street is out of the unraced Redoute’s Choice (Danehill) mare Original Choice, who is a three-quarter sister to another Brazen Beau stakes winner, Ideas Man. Brazen Beau stands at Darley’s Northwood Park in Victoria where he last year covered 127 mares at a fee of $49,500.

Epaulette – Epaulette (Commands) celebrated his 13th individual stakes winner courtesy of a victory in Friday’s Alexandra Stakes (Gr 3, 1600m) at Moonee Valley by Paradee (3 f ex Icy Heels by Medaglia D’Oro). Trained by Danny O’Brien, the three-year-old filly beat Snapdancer (Choisir) by a length, with Flandersrain (Manhattan Rain) a further half-length away in third. Bred by Bert Vieira, Paradee was purchased by her owner Ron Anderson for $240,000 out of the Bowness Stud draft at the 2018 Magic Millions Gold Coast Yearling Sale. She is the first live foal of the unraced Medaglia D’Oro (El Prado) mare Icy Heels, who is a half-sister to Breeders’ Plate (Listed, 1000m) winner Law (Denman). Icy Heels has a yearling filly by Winning Rupert (Written Tycoon) and a colt foal by Pride Of Dubai (Street Cry). Darley Stud’s Epaulette covered 138 mares last spring at a fee of $27,500.

Kinshasa No Kiseki – Kinshasa No Kiseki (Fuji Kiseki) sired his seventh individual stakes winner when Galore Creek (3 c ex Gold Relic by Kingmambo) took out Sunday’s Sho Spring Stakes (Japanese 2,000 Guineas Trial) (Gr 2, 1800m) at Nakayama. Racing for the fourth time having been tried in top-tier company at the same track in December, the Hiroyuki Uehara-trained Galore Creek quickened a length and a quarter clear of Weltreisende (Dream Journey) in second, with a further length and three-quarters back to Succession (King Kamehameha) in third. Shadai Stallion Station resident Kinshasa No Kiseki, who twice won the Takamatsunomiya Kinen Stakes (Gr 1, 1200m) on the track, is also the sire of fellow Grade 2 winners Shuji and Monde Can Know.

Kizuna – Deep Impact’s son Kizuna was also among the winners when victory for Ablaze (3 f ex Etain by  Jungle Pocket) provided the Shadai stallion with his sixth individual stakes winner by taking out the Flower Cup (Gr 3, 1800m) on the Nakayama turf on Friday. Trained by Yasutoshi Ikee, the three-year-old filly took her unbeaten record to two when beating runner-up Red Le Reve (King Kamehameha) by three-quarters of a length, with a further length and a half back to favourite Season’s Gift (Epiphaneia) in third.

Lookin At Lucky – The Brad Cox-trained Wells Bayou (3 c ex Whispering Angel by Hard Spun) continued on his upward curve and posted a clear career best when he captured the Louisiana Derby (Gr 2, 9.5) on the dirt at Fair Grounds on Saturday. Runner-up in the Southwest Stakes (Gr 3, 8.5f) at Oaklawn Park at his last start, Wells Bayou improved for the step up in trip, seeing off the challenge of Ny Traffic (Cross Traffic) by a length and a half. Modernist (Uncle Mo) finished a further two and three-quarter lengths adrift in third. In winning for the third time in five starts, Wells Bayou became the 54th stakes scorer for Ashford Stud resident Lookin At Lucky (Smart Strike), who is currently standing for a fee of US$20,000 ($35,000) (inc GST).

Lucky Pulpit – Ward ‘N Jerry (7 g ex Tamarack Bay by Dehere) gained an overdue victory in stakes company when he landed the San Luis Rey Stakes (Gr 3, 12f) at Santa Anita on Saturday. Laden with stamina but tackling this marathon trip for the first time, Ward ‘N Jerry outstayed his six rivals in the home stretch, landing the spoils by a length and a quarter to become the 12th individual stakes winner for late Harris Farms resident Lucky Pulpit (Pulpit). Camino Del Paraiso (Suances) ran second, while Oscar Dominguez (Zoffany) was a further length and a quarter adrift in third. Lucky Pulpit, who died as a 16-year-old in 2017, is best known as the sire of seven-time top-tier winner California Chrome.

Munnings – Bonny South (3 f ex Touch the Star by Tapit) brought up a hat-trick of wins when she supplemented her earlier successes at Fair Grounds and Oaklawn Park with an impressive victory in the Fair Grounds Oaks (Gr 2, 8.5f) on Saturday. Making her first start in Graded company, Bonny South took the step up in class in her stride, pulling two and a quarter lengths clear of Tempers Rising (Bayern), with a further length and a half back to Antoinette (Hard Spun) in third. The win, a third in four starts for Bonny South, formed part of a red-letter card for trainer Brad Cox, while the victory was also the 39th individual stakes success for Munnings (Speightstown), who is currently standing at Ashford Stud for a fee of US$30,000 ($52,250) (inc GST).

Ocean Park – Waikato Stud resident Ocean Park (Thorn Park) registered his eighth individual stakes winner when Out Of The Park (5 m ex Under And Over by Danasinga) came out on top in a blanket finish to the South Island Thoroughbred Breeders’ Stakes (Gr 3, 1600m) at Riccarton on Saturday. The Robert Dennis-trained five-year-old just held on from the fast- finishing pair Monza Circuito (Showcasing) and Beneficial (Highly Recommended). A $100,000 Karaka yearling purchase before being sold as a tried racehorse to current owners Mike Rennie and Jack Stewart for $14,000 on Gavelhouse, Out of the Park is out of Under And Over (Danasinga) whose four foals to race have all won. Ocean Park stands at Waikato for a fee of $15,000 plus GST.

O’Lonhro – Larneuk Stud resident O’Lonhro (Lonhro) achieved a landmark success at Moonee Valley on Friday when Mamzelle Tess (7 m ex Phoenix Crown by Sarason) became his first stakes winner in taking out the Sunline Stakes (Gr 2, 1600m). The Leon and Troy Corstens-trained seven-year-old, who was winning for the eighth time in 47 starts, got the better of Barn’s On Fire (Universal) by half a length, with a further length and a quarter back to Fidelia (Not A Single Doubt) in third. A three-time winner on the track, including the 2009 running of the Chelmsford Stakes (Gr 2, 1600m), O’Lonhro stands at Gooram-based Larneuk Stud and he covered 33 mares at a fee of $5,500 last year – his tenth season at stud.

Champion New Zealand stallion Savabeel (Zabeel) moved closer to a milestone on Saturday when his daughter Missybeel (5 m ex Sitting Pretty by O’Reilly) broke through for a maiden stakes win in the Epona Stakes (Gr 3, 1900m) at Rosehill. The 99th individual stakes winner for the Waikato Stud-based Savabeel, the Bjorn Baker-trained Missybeel defeated Gayatri (Pierro) by a neck, with Greysful Glamour (Stratum) a further length and three-quarters away in third. Missybeel was purchased by Baker and Blandford Bloodstock’s Stuart Boman for $210,000 at the 2016 Inglis Australian Easter Yearling Sale from the Waikato Stud draft. She is one of two winners out of the unraced mare Sitting Pretty (O’Reilly) who herself is a half-sister to five-time Group 1 winner Metal Bender (Danasinga).

Saxon – Wrinkly (6 g Saxon – Kyle Nadine by Marooned) marked the occasion of his 50th start with a breakthrough win in stakes company when landing the Grandstand Cup (Listed, 1500m) at Ascot on Saturday. The Neville Parnham-trained six-year-old, who was winning his ninth race, beat Harry Thomas (Scandal Keeper) by a length with Platoon (Playing God) a further three-quarters of a length away. In doing so, Wrinkly became the fourth individual stakes winner for former Western Australian stallion Saxon (DanehIll).

Your Song – Widden Stud resident Your Song (Fastnet Rock) landed his fourth individual stakes winner on Saturday as the Joe Pride-trained Miss Exfactor (5 m ex Search for Fame by Quest for Fame) took out the Birthday Card Stakes (Gr 3, 1200m) at Rosehill. Ridden by Jay Ford, the mare defeated Connemara (Fastnet Rock) by two and a quarter lengths, with Bangkok (Medaglia D’Oro) coming home another neck away in third. Miss Exfactor was a $70,000 Magic Million Gold Coast Yearling Sale Book 2 purchase by McLachlan Racing from the draft of Widden Stud. She is one of three winners out of Search For Fame (Quest For Fame) who herself is a three-quarter sister to dual Group 2 winner and Group 1 runner-up Impaler (Dracula). Your Song stood for a fee of $13,750 (inc GST) in 2019.