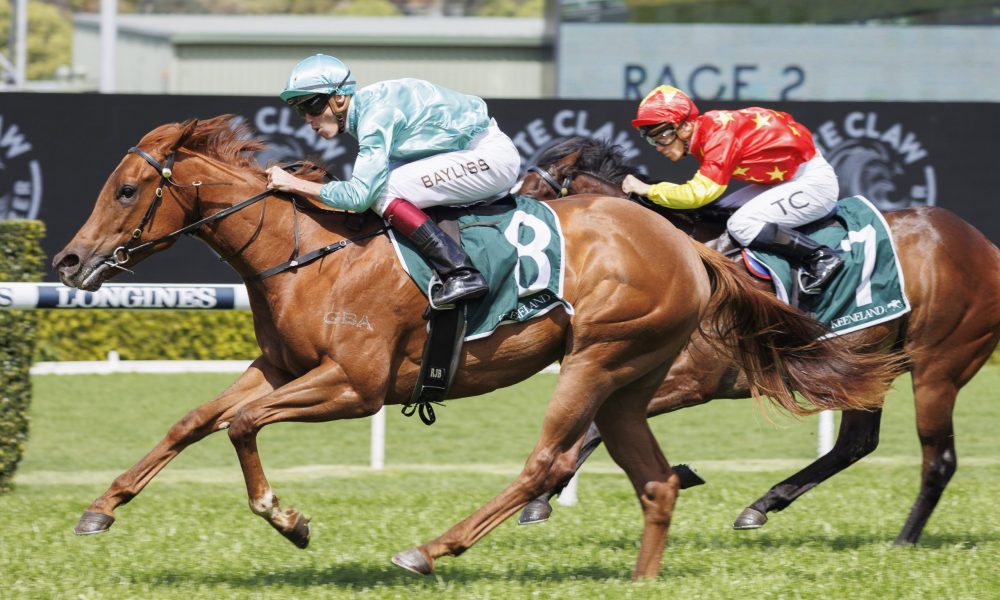 Cutting an emotional figure in the aftermath of the Gimcrack Stakes (Gr 3, 1000m) was Kestrel Thoroughbreds’ Bruce Slade who, along with Waterhouse and Bott, purchased yesterday’s juvenile season-opening race winner Platinum Jubilee (Zoustar), along with sixth-placed Sicilian (I Am Invincible) and runner-up Perfect Proposal (Russian Revolution) at the yearling sales this year, the former two for a syndicate of owners targeting filly success on the track and, ultimately, seeking to exploit a niche in the sales ring.

Buoyed by a vibrant broodmare market and armed with $1.5 million to spend at the sales this year, the group purchased four fillies, with Slade delighted with the early success.

“It was the first time we’ve pre-raised money to go out and buy fillies at yearling sales,” Slade told ANZ Bloodstock News. “We went out to go and buy what we thought were precocious, commercial types. Fillies with commercial physicals, commercial pedigrees and commercial profiles to get up and run at two and three, with the aim of turning these fillies into wonderful broodmare prospects down the line.

“We felt there was a niche in the market where those fillies were starting to make what they were truly worth in the marketplace as broodmare prospects.

“In England and America we’ve seen it for several years, where those well performed race fillies and mares, with great pedigrees and types, have made good money [as broodmare prospects], but Australia seems to have always undervalued those horses.

“But in recent times studs and breeders have really started to pay for those fillies and our job was to go and find those that we could add value to on the racetrack and then sell as broodmare prospects.

“We’ve got a great group of people behind us that had the faith in us to put the money up without even knowing what horses we were buying and to deliver with them in what was our first stakes race of the season, it’s just a real gratitude to them, I think that’s built into the whole emotion of it.

“From a capital point of view, her value is now cemented into a place where we’ve got a good chunk of it back already.

“Two have two of the four in there, and to win it with one, it’s just a great result.”

Platinum Jubilee, a $600,000 buy from the Newgate Farm draft at the Magic Millions Gold Coast Yearling Sale, and Sicilian, a $650,000 Magic Millions buy, are joined in the syndicate’s portfolio by Brazen Beau (I Am Invincible) filly Mystery Of Paris and Written Tycoon (Iglesia) filly Taormina, the latter also having trialed at Randwick on September 19, finishing third behind Sicilian, before being sent for a spell.

Despite her value as a broodmare prospect all but secured, the manner of the performance yesterday when surging with a late run, left Slade believing there is more to come.

“I think she’s exciting, just in the way that she won it,” he said.

“She’s by Zoustar, who had the first and third in the Flight Stakes today. He gets two-year-olds but he’s a great sire of three-year-olds. She’s also out of a mare that was trained by Gai and Adrian in Miss Debutante, who was another filly with a profile, and was going to be a magnificent three-year-old before she got hurt.

“Everything suggests she’s going to go and be a fantastic three-year-old beyond what she does at two.”

Slade has worked with the Tulloch Lodge stable for a number of years, and in capturing a two-year-old feature race that had thus far proved elusive for Waterhouse, the agent knew the importance of winning the contest for the legendary trainer.

“Gai sent a video to all the owners saying how she was delighted to win the race and get that monkey off her back,” Slade said.

“She’s an elite trainer of two-year-olds and for whatever reason it hasn’t happened. To quinella the race, she said it felt like winning a Group 1, it was that good.”