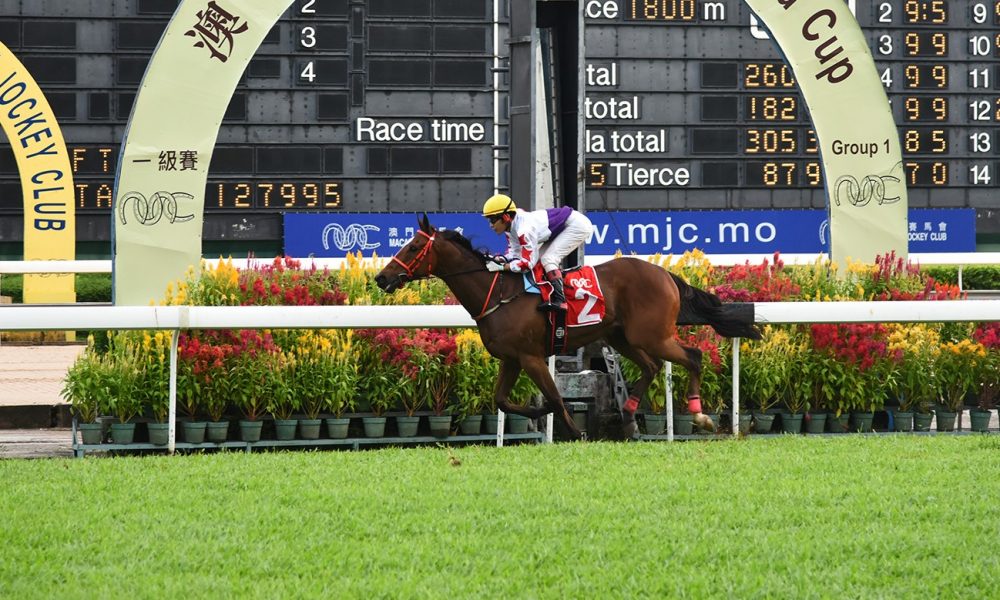 With a lack of Group 1 turf races programmed in Macau over the next three months, today’s event is a vital lead up race for the six-year-old, who Smith is aiming towards the Chinese Club Challenge Cup (Gr 3, 1400m) at Sha Tin on New Year’s Day.

However, Smith faces an anxious wait with the ever-changing Covid travel restrictions between Macau and Hong Kong. The Challenge Cup though, is only the first stage of his aspiring plans for the good-looking son of Casino Prince (Flying Spur).

“The ultimate goal is to get him to Dubai, that’s always been my plan travel permitting,” Smith said.

“I am confident that he will hold his own anywhere in the world at Group 3 level, and he is still improving; already due to travel bans, we’ve missed races in Hong Kong.

“The straight six at Meydan would suit him, but there are plenty of races over the carnival for him, he is so versatile; he’s not restricted to any distance.”

After a somewhat mixed first season in the enclave as a four-year-old, where he won four races and placed second on six occasions from his ten starts, Star Of Yiu Cheung emerged as a super galloper in his second season sweeping all before him.

In his first season the big bay was a victim of his own undoing by racing too fiercely and not settling in his races; ending up the proverbial bridesmaid with narrow defeats in four stakes races.

Now in the words of Smith, he returned a ‘proper’ horse in his five-year-old year, winning five of his six starts which included dominant victories in the Chairman’s Challenge Cup (Listed, 1200m), an effortless six-length win on the bridle in the Macau Gold Cup (Listed, 1800m); and a record-breaking win back in May where he clocked 1.07.2 for 1200 metres clipping .01 off Macau’s greatest sprinter Warcat’s (Felix The Cat) old standard from 2008.

“It’s just awesome the way he came back after his first year, his wins have been so effortless it’s mind blowing.” Smith added.

To add further merit to the gelding’s dominant season, Star Of Yiu Cheung has had to undergo two minor operations due to recurring sinus infections.

“He got two really bad sinus infections; they were just allergic reactions and they would get so bad he would be carrying his head on the side,” Smith continued.

“Both times they had to drill a hole into the frontal sinus just above the left eye. Then they insert a tube into the cavity with a balloon inside so it won’t come out; then we flushed it out for ten days with a diluted iodine solution. Once he is over it, you take out the tube and the hole heals over in no time.”

Japanese rider Shogo Nakano, who has partnered the gelding in his last three effortless wins, again takes the reins in what Smith describes as a ‘match made in heaven.’

“In his first season with any luck we would have taken all, the Guineas, the Derby and the Gold Cup but for him overacing. Shogo just gets along with him so well and gets him to relax in the run, and then he runs terrific sections his last four hundred.”

Smith considers himself very fortunate to have Star Of Yiu Cheung in his yard, but for a neck defeat in a Hawkesbury barrier trial the gelding would have been plying his trade in Hong Kong.

Star Of Yiu Cheung is by Casino Prince out of the Charge Forward (Red Ransom) mare Call Collect, who was raced by Peter Horowitz of Sir Dapper (Vain) fame. Call Collect herself was only a moderate performer winning a Sapphire Coast maiden and placing three rimes from her 12 starts.

A $50,000 purchase at the 2017 Gold Coast Magic Millions in Training Sale by Victoria Peak Bloodstock, Star of Yiu Cheung was registered under the Aquis Racing banner and aptly named in Australia as Reverse Charges.

“I was looking to buy a few nice horses when I was getting ready to start training in 2019,” explained Smith. “I’ve been friends with Shane McGrath from Aquis for years, and he recommended a couple of horses to me, and one of them was Star Of Yiu Cheung.

“He was earmarked for sale to Hong Kong, but thankfully for me he was beaten a neck in the trial at Hawkesbury. The winner was sold straight off to Hong Kong, but luckily they overlooked this horse, otherwise he would be in Hong Kong now.”

In life they say an ounce of luck is worth a ton of judgement; the horse that beat Star of Yiu Cheung in that Hawkesbury trial was named Whatever You Want. He was renamed One Happy Star (Rocker) in Hong Kong, and retired in September this year winless after 14 starts.

When it comes to assessing a horse’s worth for a tilt at international competition, few horsemen would come better qualified than Irish-born Smith.

After winning the Derrinstown Champion Apprentice Series in Ireland as a raw kid, Smith got the travel bug and spent time in both the USA and Australia. A stint with the legendary Colin Hayes at Lindsey Park, which he described as a fabulous learning experience that helped shape his career, preluded an opportunity to ride in Dubai.

Star Of Yiu Cheung lines up today against the same runners that he has treated with contempt in his previous 1200 metres wins, and again in a cracking turf trial on October 5 where he was never off the bridle. That is, with the exception of one runner, the former top-line Hong Kong sprinter Thanks Forever (Duporth).

The much-awaited Macau debut for Thanks Forever finally arrives, with his trainer Nick Moore delighted with the condition of the star galloper who is Macau’s highest-rated horse on 123 points.

Thanks Forever is best remembered for his brilliant win over Hot King Prawn (Denman) in the 2020 Sha Tin Vase (Gr 3, 1200m). Prepared by John Moore the son of Duporth (Red Ransom) only raced once more before suffering his second bleeding attack, and was then barred from Hong Kong racing.

“First off I’ve got to say what an honour it is to have a horse like this in my yard.” Moore said.

“Macau has a more liberal stance on bleeders so we are one of the few places worldwide where he can continue to race. The owners, who are all in Hong Kong, wanted to still be able to see him race, and Uncle John (Moore) recommended that he come to my stable. So, I guess I should be saying thanks forever to Uncle John.”

A big strong type, Thanks Forever was purchased by George Moore Bloodstock for $170,000 at the 2017 Magic Millions Gold Coast Yearling Sales.  He won five and placed a further seven times in Hong Kong, and earned a reputation as one of Hong Kong’s best sprinters before going awry.

“He looks a picture of good health,” Moore continued. “I could not be happier with him. He has had three trials in readiness for this; the first two were easy and no pressure, and his latest trial last Tuesday week we asked a bit more of him, and I was wrapped with the way he went.

“We’ve scoped him regularly and he has come up as perfectly clean. I’ve done my job I cannot do anymore. But we must remember he has not raced since June 2020.”

Filipino horseman Breinell Yamzon who has been the horse’s regular partner in his track work and his trials, takes the ride.