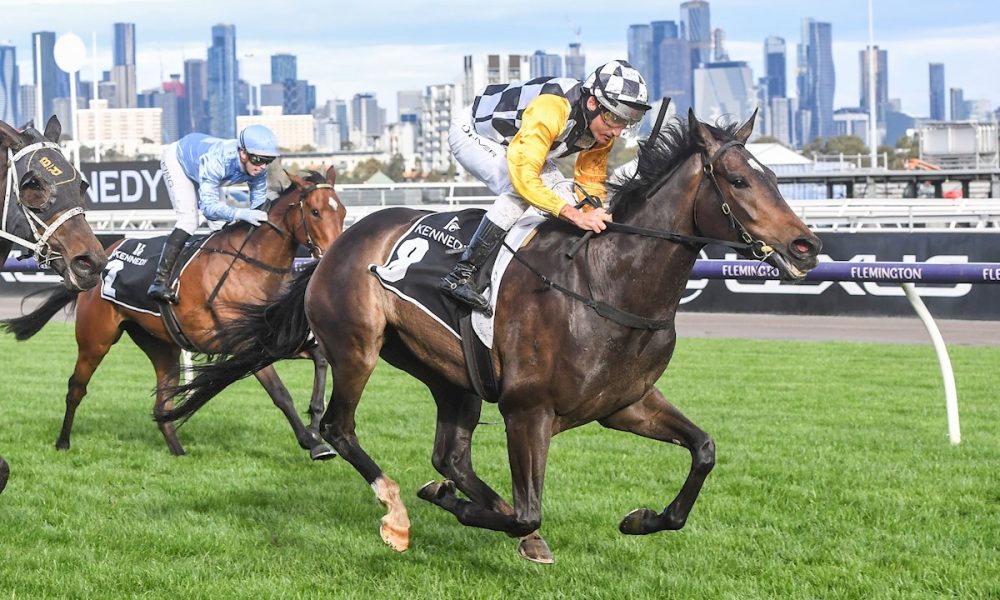 Old hands and new have combined to bring us So Dazzling, the latest piece of equine excitement amidst the seemingly unstoppable rise of So You Think (High Chaparral), and an early favourite for the VRC Oaks (Gr 1, 2500m).

In terms of the former camp, she’s the emerging potential star from New Zealand expat John Sargent, the Randwick-based trainer with a CV bulging with three-year-old female talent, perhaps a Neville Begg of his age.

And from the new division, she’s an early elite-level prospect for a young couple in breeding, Annabel Wigley and Olly Tuthill, who bought a former deer farm north of Christchurch five years ago and – having replaced many furlongs of deer fencing and acquired a small band of broodmares – appear to have kicked off Beaufort Downs stud with a bang.

So Dazzling, whose early progress was delayed by a colic operation, was sent south for Flemington’s VRC Oaks Preview (1800m) last Sunday at only her second start. She was stepping up from a fifth over 1400 metres at Warwick Farm to 1800 metres, on a track descended to a Heavy 10, but on the strength of her finish on debut, and doubtless on Sargent’s reputation, she was sent out as favourite.

Carrying the same famous black, white and gold colours colours as her dad – then Dato Tan Chin Nam’s, now Think Big Stud’s – and bearing a white star reminiscent of her dad’s as well, she settled third-last, started a long and wide run from the 800 metres, and surged down the lung-busting straight to score an emphatic three-quarters of a length win.

Sargent says she’ll have a provincial run in the Sydney area, most likely in Benchmark class over 2000 metres, before being sent south again for the Wakeful Stakes (Gr 2, 2000m) over the same trip five days before the Group 1 Oaks, over 2500 metres.

If she can feature in the finish there – she currently shares favouritism with Randwick neighbour, the Anthony Cummings-trained She’s Extreme (Extreme Choice) – So Dazzling will plant a large and gleaming feather in the cap of her breeders.

Wigley and her English husband Tuthill – now kept busy not just with infant horses but three children under five as well – moved from the UK to Canterbury in 2017. She’d been eventing, and he played polo, but the pair set about breeding racehorses, near Wigley’s parents’ farm. While that was a sheep property, a love of thoroughbreds had run through the family for decades, while Wigley’s cousin Gus Wigley is the third-generation owner of nearby Inglewood Stud, which stands War Decree (War Front).

“It’s been busy but we’re loving it here,” Annabel Wigley tells It’s In The Blood. “It used to be a deer farm, so Olly’s been busy replacing a lot of the old mesh deer fencing and putting in horse fencing, but it’s a beautiful place to live.”

Annabel’s parents, John and Sally, have sold the sheep farm and gone into partnership with some of Beaufort Downs’ mares.

And among the 100-acre stud’s 14 such stock is the ten-year-old Dazzling Lady (Lonhro). A two-time winner from 11 starts in New Zealand, she was bought by Wigley and Tuthill from across the Tasman for $155,000 at the Magic Millions National Broodmare Sale of 2018.

“We really wanted a Lonhro mare as we were starting off our broodmare band, and she was nice and correct, had a pretty good race performance, we just really liked her pedigree,” Wigley says.

Boasting a 3Sx4D cross of the great New Zealand blue hen Eight Carat (Pieces Of Eight), Dazzling Lady was bought from the Gold Coast carrying her first foal, by So You Think. And after a filly emerged, still in Australia, her new owners went back to the well.

So You Think’s service fee had dropped to $44,000 that year and would fall again to $38,500 in 2020. Now, thanks to the likes of recent Group 1 winners Think It Over, Nimalee and Knights Order – who helped the son of High Chaparral (Sadler’s Wells) to a narrow second to I Am Invincible (Invincible Spirit) on last season’s general sires’ list – it’s at $93,500.

“Dazzling Lady’s first foal was a fairly typical first foal. She was lovely looking, but a wee bit finer,” Wigley says of Felicity Then, who was passed in short of a $150,000 reserve at Karaka Book 1 in 2020, and has had two unplaced runs in New Zealand.

“But we liked the cross, and the physicals matched up well, so we sent her back to So You Think, and she came home carrying So Dazzling, who had a bit more substance to her.”

While Lonhro as a damsire doesn’t make So You Think’s top 10 nicks, his grandsire Zabeel (Sir Tristram) certainly does, ranking second with 22 winners from 28 runners – four at stakes level, including Think It Over. Moreover, Zabeel rates as High Chaparral’s number one, with 35 from 48 featuring eight in black type, including Dundeel.

Aside from substance, the young So Dazzling had a superb temperament as well, coping admirably with the South Islander’s lot in attending last year’s Karaka sale.

“It’s a two-day trip, and one of those things you have to get used to being from down here,” Wigley says. “We go from here up to Blenheim, then 12 hours on the boat across the strait to Bulls on the North Island, a night there to rest up, then on the float again to Karaka. So Dazzling coped with it wonderfully, which was a good sign.”

The filly also caught the eye of Sargent and Think Big buyer Duncan Ramage. Unable to travel due to Covid restrictions, they relied on videos and the eye of New Zealand bloodstock agent Marcus Corban, and secured her for $200,000.

“She was just a nice, big-walking filly; nice big ears, a nice kind eye, and correct,” Sargent says. “We’ve had a good run with So You Thinks, and Duncan has too, and she was in a good price range. People will be paying a lot more for So You Thinks now.

“This filly didn’t show much early. The So You Thinks tend to be gangly horses and just need time to come into their bodies, but this filly has really boomed in the last month or two.”

Sargent knows his way around a young filly, with such performers in the recent past as 2012 Queensland Oaks (Gr 1, 2400m) winner Quintessential (Fast ’N’ Famous), 2017 Wakeful Stakes (Gr 2, 2000m) victor and multiple black–type winner Luvaluva (Mastercraftsman), and Gust Of Wind (Darci Brahma), forever famous as the last horse to beat Winx (Street Cry), in the 2015 ATC Oaks (even if the pair’s last defeat and last success coincided).

He credits his affinity with fillies as an offshoot from five years in England with another trainer well remembered for them, Harry Wragg. There’s a knack to it, of course, but he admits it’s also often a case of as needs must.

“Patience is the key to fillies. You can’t hurry them. They’ll come to you. I put them in and out and in and out, and they’ll tell you when they’re ready for something,” Sargent says.

“They are a lot harder to train than colts. They’re finicky; they come in season, out of season, this and that. But also, I’m not a hard trainer, I don’t gallop horses a lot, so that helps.

“But another thing is, I get a lot of them because I tend to buy fillies. I don’t have the money to buy up and running two-year-old colts, and Hong Kong buyers don’t want fillies either.”

He’s a fan of Lonhro broodmares, and has “some very good So You Thinks” in his stable, which he feels could lie behind So Dazzling’s emergence as an Oaks contender.

“But you also find often,” he says, “with the three-year-old fillies I’ve had who’ve won Oaks races, they mightn’t be out-and-out stayers but they’re just a class horse of their age group. They can do it at three because they’re against other fillies. It’s a bit different at four and five, but the class does shine through at three, so I hope So Dazzling will carry on with it.”

Meanwhile, Wigley and Tuthill have kept a two-year-old half-sister to So Dazzling by the late Tavistock (Montjeu) who, they hope fortunately, didn’t make the sales ring due to injury. Dazzling Lady has also presented them with a Microphone (Exceed And Excel) colt going to Karaka next year, is in foal to Hello Youmzain (Kodiac), and all going well will be covered by Per Incanto (Street Cry) this spring.