Spirit Of Boom gets his Group 1 as Jonker lands Manikato 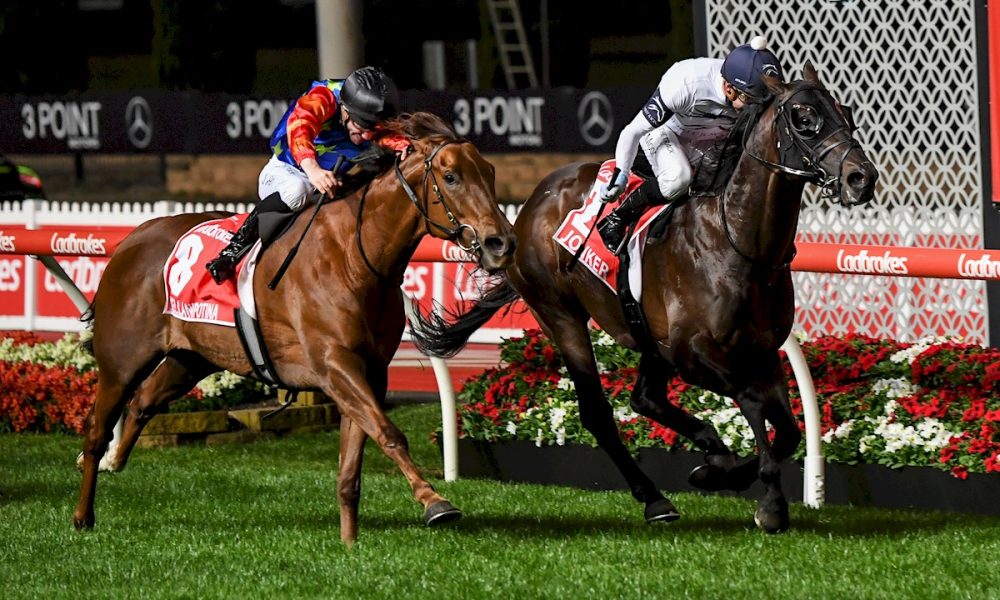 Spirit Of Boom (Sequalo) enjoyed his greatest moment since joining the stallion ranks when Jonker – who is from the sire’s first crop – became the stallion’s first Group 1 winner courtesy of his victory in the Manikato Stakes (Gr 1, 1200m) at Moonee Valley last night.

After breaking smartly from the barriers, the Tony Gollan-trained entire was urged straight into the lead by Daniel Moor and set decent fractions at the head of affairs.

As the field straightened, Jonker had already built up a healthy lead, but Bella Nipotina (Pride Of Dubai) was flying down the track, closing the margin with every stride. However, Jonker kept galloping strongly to repel Bella Nipotina’s advances by a nose with Ingratiating (Frosted) another two and a quarter lengths back in third.

The six-year-old was one of Spirit Of Boom’s headline horses during his first season of runners, and he became the stallion’s third individual stakes winner when he landed the Wyong Magic Millions 2YO Classic (RL, 1100m) on his second start, having also been successful on his career debut at Newcastle.

Following his victory at Wyong, Jonker started second-favourite in the Magic Millions 2YO Classic (RL, 1200m) on the Gold Coast, but endured a torrid run in the race and eventually finished last of 16 runners.

Harry McAlpine – whose family own and run the Eureka Sud where Spirit Of Boom resides – said the horse not only looks like his father, but has also nearly had exactly the same career, including their Group 1 victory, with Spirit Of Boom chalking up his maiden elite-level win when he landed the 2014 edition of the William Reid Stakes (Gr 1, 1200m) over the same course and distance.

“It’s great to see both horse and sire get their Group 1 monkeys off their backs,” McAlpine told ANZ Bloodstock News. “He’s so like Spirit Of Boom – it’s uncanny. They both won leading into the Magic Millions 2YO Classic race, they both started second-favourite in the actual race itself and they both got bashed from pillar to post. It took them both a long time to get the race confidence back and then they both went on to win their first Group 1 at Moonee Valley over 1200 metres.”

In winning the Group 1 contest, Jonker was adding a fifth win in 28 starts to his record, but he has run consistently well at Group level throughout his career, headlined by second place finishes in the last season’s Kingsford-Smith Cup (Gr 1, 1300m), while he was also narrowly denied a win in the George Moore Stakes (Gr 3, 1200m) last December.

Prior to winning yesterday, the six-year-old was last seen running sixth in the Premiere Stakes (Gr 2, 1200m) on October 2 and McAlpine said the entire deserved to win a Group 1.

“He just had no luck on his last start in Sydney and I think this race was custom made for him,” said McAlpine. “The Spirit Of Boom’s go really well in the short-courses with the quick turns, so Moonee Valley looked ideal for him.

“He had not raced there before, but the tempo was perfect for him as well, so everything just lined up perfectly and it was great to see him get the job done.”

McAlpine revealed studs has expressed their interest in the six-year-old prior to yesterday’s win and landing the time-honoured race will only enhance his profile as a bone fide stud prospect.

“The owners had already had interest from studs to stand him as a stallion and I believe they will have a lot more now. Obviously, we at Eureka would dream to get a horse like that, but obviously the competition might get a bit tougher now.”

The stallion is now being offered to breeders at a fee of $33,000 (inc GST) and McAlpine said that, given how much he upgrades his mares, he is looking forward to seeing how far Spirit Of Boom can go with his runners out of those better quality mares.

“Spirit Of Boom has once again covered a lovely book of mares and he has been very well supported this year and I would say he will cover about 150,” said McAlpine. “He has had the likes of Karuta Queen and a few other star mares come back to him and everyone has been very impressed with the nice stock they saw as yearlings, which are now two-year-olds by him.

“He is getting a bit of appreciation and he is doing a tremendous job from limited opportunities and he is on the rise. He is a very good stallion and he upgrades his mares, but he also appreciates a good mare and if you do send a decent mare to him you are rewarded.

“Eureka has supported him heavily, obviously having stood the stallion and we also own a large piece of equity in him and we have always supported him with nice mares from the get go and a large percentage of his stakes winners have come off Eureka as a result of that. It is really exciting to see what he will be able to do with the mares that visited him off the bigger fees.”

Gollan, watching from his Queensland base, said he was proud Jonker was able to show his exceptional talents at the top level.

“It’s been a luckless spring for one reason or another,” the trainer said. “Tonight we were able to see the real horse.

“He wasn’t great away, did a mountain of work and was still there fighting at the finish. The others all had their chances.”

Gollan was unwilling to make race-day plans as to where the six-year-old may head for his next start: “I will talk to the Snowdens as they have been integral in his preparation over the past seven weeks

“We were looking at Perth but that is very tricky now with the Covid situation – but we will see as there’s other options.”

Those options could include a feature on The Star Gold Coast Magic Millions Raceday in January or he may even be given the chance to emulate his sire in the William Reid Stakes at Moonee Valley later on in the year.

“He’s been an incredible horse for all of his connections. I wasn’t sure what to expect when he arrived – but he got to the stable in great shape and he’s been a star.

“He’s had three runs in Group 1s for us for a first, second and third and he’s broken a track record in Brisbane and won a feature on Magic Millions Day!”

Gollan was quick to heap praise on the Snowden team who had been overseeing the six-year-old’s training with his trainer unable to travel due to Covid restrictions.

“I’m very grateful to the owners for sending him my way and I’d really like to thank Peter and Paul Snowden and their team – I haven’t seen the horse for seven weeks and they’ve been incredible looking after him for us.”

The win continued an incredible spring for Moor – his third career Group 1 – all achieved this spring. He landed his first in the Sir Rupert Clarke Stakes (Gr 1, 1400m) aboard Sierra Sue (Darci Brahma), while he added a second to his CV on Wild Ruler (Snitzel) in the AJ Moir Stakes (Gr 1, 1000m).

“I said to Tony Gollan this morning that he gave me a similar feel to what Wild Ruler gave me (leading into a recent Group 1 win),” Moor said. “He’s a lovely gentleman of a horse and I’m so pleased to have got the job done.

“He’s an older horse who likes a challenge. He’s been a little doughy out, but we wanted him out in front in his own leisure. He loves a challenge and rolling on his own accord.

“Obviously being a Group 1 race there was always going to be a lot of speed and I knew I had the horse to absorb that pressure early.

“He floated a little bit (near the corner) but when I gave him a good roar he was strong,”

Bred by Wicklow Lodge, Jonker (6 h Spirit Of Boom – Hearts And Arrows by Kempinsky) was purchased by Doug Crich for $45,000 at the 2017 Magic Millions Gold Coast Yearling Sale from the Fig Tree Thoroughbreds draft.

He is one of three winners out of the dual-winning Kempinsky (Danehill) mare Hearts And Arrows, who is herself a half-sister to three-time Group 3 scorer Fiscal Fantasy (Skilled) and fellow Group 3 scorer Fair Trade (Danewin).

Further back this is the same family as dual Group 2 winner Impaler (Dracular) as well as Miss Exfactor (Your Song), whose best victory came at Group 3 level.

Hearts And Arrow’s produced a sister to Spirit Of Boom this season and she was covered by Coolmore Stud resident Pierro (Lonhro) in September.