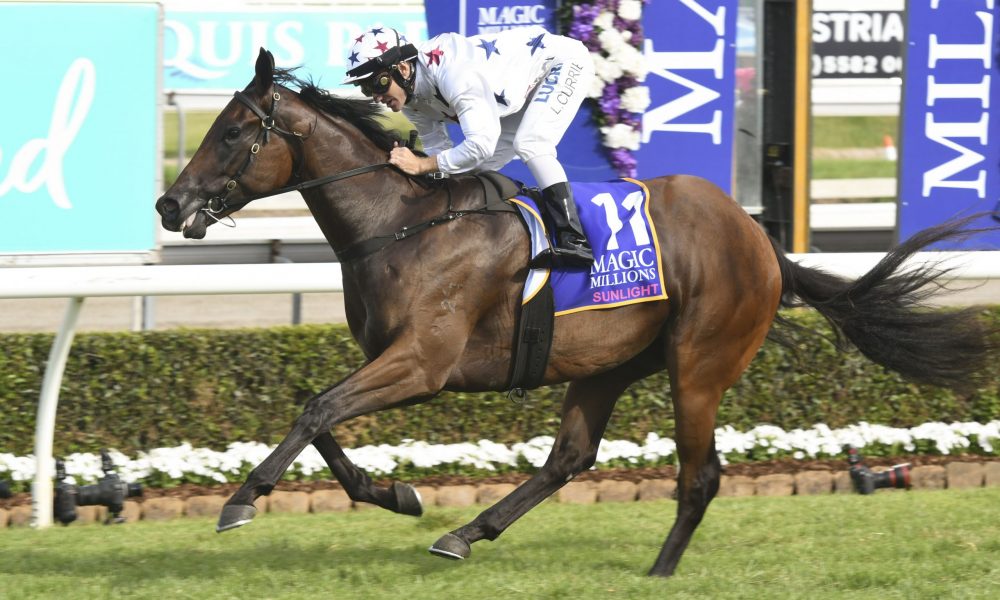 Tony McEvoy says it is immeasurable what champion mare Sunlight (Zoustar) has done for his training business while her breeder believes the three-time Group 1-winning sprinter would be worthy of becoming a foundation broodmare on any farm in the world.

The glowing endorsement of Sunlight came after the decision was made by connections to this week retire the four-year-old from racing and put the highly sought after mare up for auction at July’s Magic Millions Gold Coast National Broodmare Sale, the same ring she was sold out of as a yearling.

McEvoy, who was joined by son Calvin in training Sunlight this season, prepared the mare on behalf of an all-women’s syndicate that includes his business partner Wayne Mitchell’s wife Irene, Aquis Farm’s Loretta Fung and Widden Stud’s Katie Thompson.

The dual-state trainer yesterday said that Sunlight, who was unplaced in the Robert Sangster Stakes (Gr 1, 1200m) and The Goodwood (Gr 1, 1200m) earlier this month, was deserving of all the accolades she would receive upon her retirement.

“It’s the end of a road, but it’s been a very good road for us. She’s been an absolute privilege to have in our stable and she gave us a magnificent ride,” McEvoy said.

Widden Stud’s Antony Thompson, who co-bred Sunlight, said the mare was “a true queen physically” who would command the attention of all the major breeders.

“She’s a stunning individual and she’s got a great pedigree that will attract everyone from around the world,” Thompson said.

“Her brilliant speed is something that really stands out and puts her up there on the most desirable mares to add to your broodmare band. You can’t replicate that sort of speed and it’s so hard to come by. She was an early two-year-old who returned as a three-year-old to be a champion filly and she was also able to beat older horses.

“That is a rare achievement for a three-year-old filly, to win a Newmarket. That’s only happened a handful of times in the history of the race and that really tells you she is that sort of mare who can be a foundation mare for any farm around the world.”

Sunlight, who won five of her eight starts as a juvenile, also played a pivotal role in her Widden Stud-based sire Zoustar (Northern Meteor) taking out the coveted champion first season sire title in 2017-18 and catapulted him into one of the most commercial young stallions in the three seasons since she started racing in October, 2017.

Thompson described Sunlight’s victory in the 2018 Magic Millions as an “incredible feat” that was borne out of a plan hatched nearly four years earlier when a syndicate went about sourcing high-class mares for Zoustar’s maiden season at stud.

Sunlight is a daughter of dual Group 3 winner Solar Charged (Charge Forward), who was specifically purchased at the 2014 Magic Millions Gold Coast National Sale to go to Zoustar. She made $650,000 that year.

“We bought Solar Charged there to go to Zoustar in his first crop and planned that mating with David Redvers, Qatar Racing and Dan Fletcher of Telemon Thoroughbreds who has also got a share in Solar Charged,” Thompson said.

“This was the mare and the mating that we thought would give Zoustar an early runner, so we went out and bought Solar Charged for a lot of money at the Magic Millions mares’ sale.

“We took that filly back to Magics with the intention of trying to get her to win the Magic Millions and for her to do that was an incredible feat and one of our proudest moments.

“To see her go on from there, run so well in the Golden Slipper and give us so many other great thrills including in Zoustar’s trifecta of the Coolmore and when she beat the older horses in a Newmarket – that’s one for the ages.

“She’s been a life-changer for everyone involved and she is very, very special.”

McEvoy combined with Aquis Farm and Blue Sky Bloodstock to purchase Sunlight for $300,000 at the Magic Millions Yearling Sale in 2017 before paying double that in conjunction with David Redvers a year later for her younger sibling, the subsequent Group 3–winning filly Sisstar (Zoustar).

McEvoy was, of course, also a big believer in Sunlight’s credentials as a broodmare prospect.

“She has got the package. She has got a great temperament; she has got great purpose; she has great depth and is built to be an incredible mother,” he said.

“She will throw champions to come, I’m sure.”

Magic Millions managing director Barry Bowditch was delighted that the company would be able to play its part in Sunlight, “a great ambassador” for the auction house, completing a full circle by returning to the Gold Coast for the scheduled July 20 to 24 sale.

“We’ve had conversations with the ownership group in recent times and obviously they are great clients of ours, from Tony McEvoy’s team through to the owners and the breeders Antony Thompson and Dan Fletcher as well, so I am pleased that we will be able to sell her one more time,” Bowditch said.

“This sale has proven that all the big international players take notice and we’ll be engaging with buyers from all over the world as well as domestically about a mare of Sunlight’s quality.”

The addition of Sunlight to the Magic Millions National Sale, which was initially slated to start with a weanling session this week before the onset of Covid-19 shut down the economy and forced the three-week event to be pushed back, follows on from the recent confirmation that fellow Group 1-winning mare Viddora (I Am Invincible) would be offered at the Gold Coast in foal to Lope De Vega (Shamardal).

Australian Oaks (Gr 1, 2400m) winner Unforgotten (Fastnet Rock), who will be offered under the Blue Sky Premium Consignment on behalf of her owners, is also catalogued.

In the past, Magic Millions has sold Group 1 winner Bounding (Lonhro) at the National Sale for $1.9 million to US interests while her mother Believe’n’succeed (Exceed And Excel) was bought by Coolmore’s Tom Magnier for $1.1 million in 2014.

Bowditch is confident that the leading international investors would again be paying close attention to this year’s Magic Millions catalogue given the impact Australasian mares had been having on world bloodlines in recent times.

“You only have to look at the buying bench that turns up each year, but having the results with Bounding and Believe’n’succeed, Bounding’s mother, producing the Epsom Derby winner certainly helps,” he said.

“They were both were sold here and you also have the likes of (the UK’s) John and Jake Warren buying Missrock here last year (for $2.3 million) and Katsumi Yoshida and buyers of his ilk being active in this very sales ring,

“It’s a proven source of these elite mares who can go all over the world and succeed these days.”