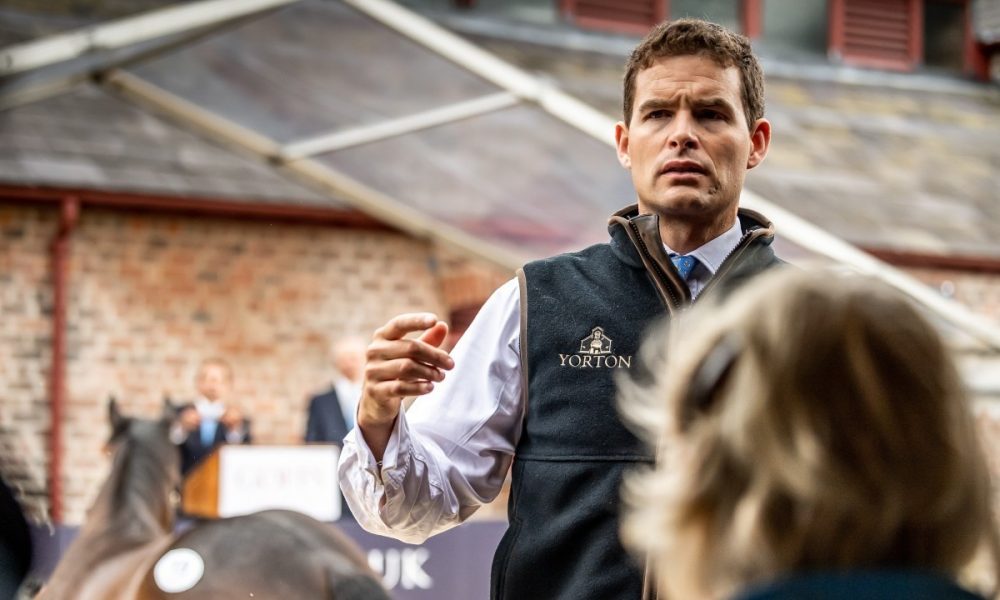 Intensity of trade built on an upward curve throughout the two-day Goffs UK Premier Yearling Sale, which concluded on Wednesday, and the final results duly made for positive reading, particularly the rock-solid clearance rate of 89 per cent.

The six-figure colt becomes comfortably the most expensive offspring of Harry Angel, who graduated from the Ballyphilip Stud draft at the 2015 Premier Sale before landing a string of major races for Clive Cox, most notably the July (Gr 1, 6f) and Haydock Sprint Cups (Gr 1, 6f).

The striking youngster was bred by Cheveley Park Stud from the Exceed And Excel (Danehill) mare Red Box, who carried the famous red, white and blue silks to stakes success having been awarded the 2016 Valiant Stakes (Listed, 1m) in the stewards’ room.

“As for the horse himself, he’s by one of the best horses this sales ring has ever seen and is out of a very fast mare. I like to see the horses parade in the back ring and it was like men against boys watching him walk around there,” said Elliott, who said the colt would head into training with Clive Cox.

“He’s been bought for a new client of mine and with the passing of Sheikh Hamdan, who was such an influential figure throughout the industry, and especially at this sale, we felt there was a bit of a gap in the market.”

Coolmore joined a diverse buying bench late in the piece when the operation’s British representative Kevin Buckley signed at £160,000 (approx. AU$302,755) for the Starspangledbanner (Choisir) filly out of Under Offer (Bated Breath).

“The team loved her and she’s been signed for by MV Magnier,” said Buckley. “He’ll decide which trainer she’s going to in due course.”

The filly was presented by Alice Fitzgerald, who bred the youngster with her partner Mike Doyle under the Summit Bloodstock banner.

Under Offer, a Bated Breath (Dansili) sibling to a trio of French stakes performers, was picked up for just 10,000gns in 2018. She was reoffered at Tattersalls in 2019 while carrying the Starspangledbanner filly, her first foal, in utero but was retained at 75,000gns.

“I’m delighted and that’s a fantastic start for the mare,” said Fitzgerald. “She was a bit of a bargain when we bought her and we actually took her to the December Sale but didn’t sell her, which obviously we’re delighted about now! The mare isn’t overly big so I think Starspangledbanner has put a bit of strength into this filly.”

At the start of the second day, it took just 22 lots for day one’s highest price to be eclipsed as Richard Hughes got the better of Richard Ryan for the Ribchester (Iffraaj) colt out of Mirabile Dictu (King’s Best) from Ballyhimikin Stud with a bid of £125,000 (approx. AU$236,500) delivered from the gangway.

“I’ve done the rounds for two days and I thought he was the best horse here,” said Hughes. “I absolutely fell in love with his walk and his movement. He’s a big, solid horse so he’s going to be a fine individual.

“He’s very mature already so we’ll see how we go with him. I still own him at the moment so there’ll be a few sleepless nights! I couldn’t help myself though as I thought he was the standout here.”

Bred by Joseph Stewart Investments, the colt is a half-brother to four winners, most notably the Listed-placed Tres Belle (Holy Roman Emperor).

Hughes said he is yet to train the progeny of Ribchester, but has two members of the stallion’s second crop to look forward to next year having also secured a son of the Kildangan Stud resident from Redpender Stud at £28,000 (approx. AU$53,000) during day one.

In his end-of-sale address, Goffs UK’s managing director Tim Kent said: “The Premier Sale is back on track! Last year’s sale endured its own Covid-related challenges but, with the help of a very loyal band of vendors and purchasers, we’ve seen a remarkable trade over the two days and proved to everyone that 2020 was a one-year blip due to circumstances beyond anyone’s control.

“The car park has been overflowing since Sunday morning and the footfall of genuine buyers has been incredible. There has been a real buzz around the sales complex over the last few days and it’s great that this has resulted in trade which started well yesterday, finished strong last night, and kicked on again today.

“The impressive 89 per cent clearance rate shows the demand for Premier Yearlings is as strong as ever. The fact that the 13 six-figure yearlings were purchased by 11 different buyers demonstrates the diversity of the buying bench associated with this sale, whilst our policy of going ‘back to the future’ when selecting the traditional ‘Donny yearling’ has clearly proved popular with buyers.

“It’s also rewarding to see the sale topped by a son of Harry Angel – a brilliant sprinter who we sold at this sale in 2015. The Premier Sale has proven its ability to produce the very best, having also sold the likes of Dark Angel and Wootton Bassett, and to see them excel at stud is a great advert as to what can be found at this sale.”

He added: “We’ve said this before but it is never more relevant than today; we simply cannot do without our clients. Without them, we are nothing and we would like to thank all of our vendors for putting their faith in the Goffs UK team. We are absolutely delighted that this loyalty has been well rewarded, and we wish all purchasers the best of luck with their new racehorses.

“We are already looking forward to next year, when we will see the next star graduates emerge, and build again on two great days in Doncaster.”