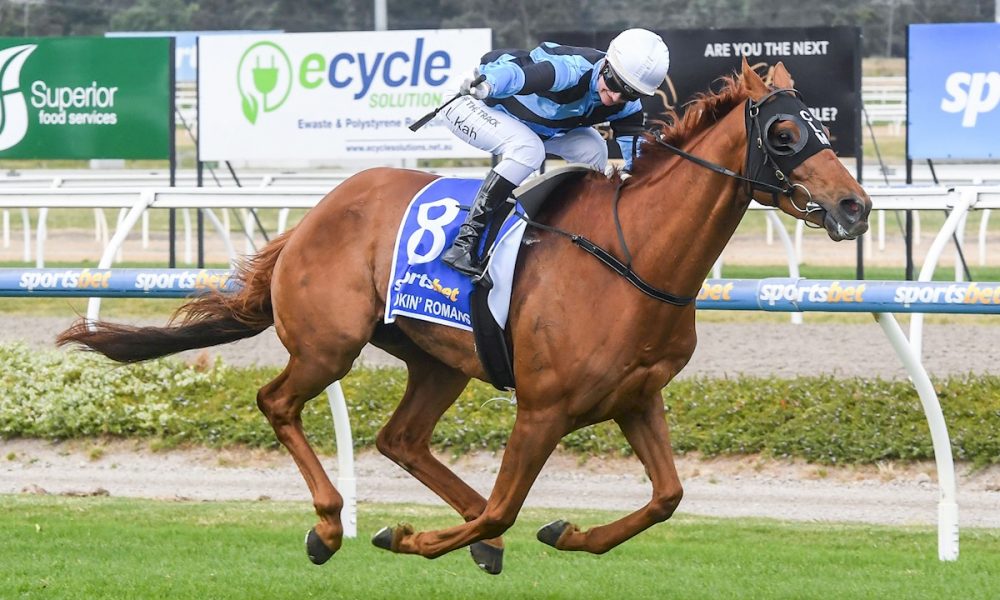 Time can often be a thoroughbred’s best friend. The riches available for two-year-olds, especially in Australia, can be very tempting but many New Zealand–bred horses are simply not ready at that age.

A long program of importing staying lines from England and Ireland, dating back sixty or more years, has meant that the blood that exists (and persists) in the New Zealand Stud Book has far stouter leanings than is found in the Australian Stud Book.

Champion sires Count Rendered (Precipitation), Summertime (Precipitation), Le Filou (Vatellor), Faux Tirage (Big Game), Agricola (Precipitation), Alcimedes (Alycidon), Oncidium (Alcide) and Zamazaan (Exbury): all their progeny appreciated patience, and when given the same, excelled over distance. Hence, Australian trainers showed up at Trentham in droves to secure their cup horses by these and many other such sires.

Leading Victoria trainer Mick Price summed it up a few years ago at Karaka, saying: “We know what we are buying when we come to New Zealand and most often we know that we have to wait.”

White Robe Lodge, Taieri (near Dunedin), has a history of standing sires whose stock excel over the longer distances. Mellay (Never Say Die) followed by Noble Bijou (Vaguely Noble) are their best examples and when those two sires’ blood was crossed, it only served to underline the fact.

His damsire, Elusive Quality (Gone West) was Champion Australian Two-Year-Old Sire while his granddam, Camarena, despite being bred on the Danehill (Danzig) – Marscay (Biscay) cross, is an outlier and had the class to take out the Queensland Oaks (Gr 1, 2400m).

Champion Two- and Three-Year-Old Sepoy (Elusive Quality), winner of the Golden Slipper (Gr 1, 1200m), ranks as a brother-in-blood to Ghibellines’ dam Camarena as they are by the same sire and out of full sisters.

And so to Saturday and the $300,000 Pakenham Cup (Listed, 2500m), won in good style by Smokin’ Romans, the latest stakes winner for Ghibellines.

Smokin’ Romans acted as the main chaser down the back straight but began to pressure the leader from the 800 metres and ranged up rounding into the straight. In the run home, the five-year-old took over comfortably and from the 200 metres the result was never in doubt as he stayed on best to score by two lengths.

Yes, “stayed on best”, showing the sort of staying form for which Kiwi-breds are renowned.

A close second in the Bendigo Cup (Gr 3, 2400m) at his previous start, Smokin’ Romans has been in work for some considerable time, his co-trainer David Eustace explaining that the gelding is a favourite in the stable. “He’s an absolute legend. He’s been in work over a year and he just keeps turning up. He loves his racing and he’s just getting better and better,” said Eustace, who perhaps was referring to the New Zealand patience and time factor.

From 18 starts, the Pakenham Cup is his seventh success and combining his six placings his earnings have reached $531,415. His running style, being able to sit just off the pace yet run out a strong 2400 metres, suits a tricky track like Caulfield where he has placed. Their cup might be a worthwhile long-term goal.

Smokin’ Romans was sold at the 2018 Karaka Yearling Sales (Book 1) to Darren Weir for $52,500. His dam, Inferno, is by White Robe Lodge’s own Yaminan Vital, herself one of her sire’s best, winning on ten occasions including back-to-back runnings of the Canterbury Gold Cup (Gr 3, 2000m).

“We decided on Ghibellines to add some early maturity to the lines we have and it has worked a bit,” said Stewart. “Smokin’ Romans fits the category of being a fast stayer. He can take a handy position yet runs out his races strongly. He is a good advertisement for us, doing a great job. He is not our first Pakenham Cup winner. Etah James won the same race before her Sydney Cup win.

“The desire to breed fast stayers began when we stood Yaminan Vital. Many breeders may not know that Yaminan Vital ran world class times at 2000 metres in Japan and Smokin’ Romans’ dam is by Yaminan Vital.” he said.

“He was a November 10 foal and is typical of our more natural breeding program. We allow our mares to breed naturally and many foals are born when it’s warmer and there is plenty of feed,” continued Stewart.

Weir bought Smokin’ Romans on spec but Kiwi owner Don Frampton approached him regarding an interest and Frampton and party ended up with 65 per cent of the shares. They maintained their interest after Weir’s ban from training, the gelding subsequently being transferred to the Ciaron Maher/David Eustace establishment.

Maher and Eustace have further progeny of Ghibellines in their stable, White Robe Lodge having sold several, privately, to the successful training duo.

“Having a top class miler like Markus Aurelius with Jamie Richards has upped the stallion’s profile greatly,” said Stewart. “Some of our clients have retained shares in Markus Aurelius and he could easily go to the next level and win a Group 1.”

Three of Inferno’s four named progeny are winners. The mare has an unraced three-year-old filly, Brilliant Belle by Zacinto (Dansili), a two-year-old brother to Smokin’ Romans but was not served in 2019. This spring she produced a filly by Ghibellines and has been served by the stud’s latest acquisition Ancient Spirit (Invincible Spirit).

Stewart added: “Inferno’s foal is a really lovely filly so we might have to send her back to Ghibellines next year.”

Inferno’s granddam, Listed placed Gem Fire (Noble Bijou) is a daughter of Firefly (Fraximus), the winner of nine races including the Dunedin Gold Cup (Gr 3, 2400m). Firefly was one the better three-year-old fillies of her crop with thirds in the New Zealand 1,000 Guineas (Gr 1, 1600m) and the New Zealand Oaks (Gr 1, 2400m).

Hard on the heels of a historic week for Waikato Stud’s Savabeel (Zabeel), the stud and stallion celebrated, yet again, with the win by his daughter Angelic Miss.

Savabeel wrapped up all three sires’ awards (and not for the first time); the Grosvenor Award (Leading New Zealand Sire), the Dewar Award (combined Australian and New Zealand earnings) and the Centaine Award (worldwide earnings).

Prior to Saturday’s success in the Jungle Dawn Classic (Listed, 1400m), consistent five-year-old mare Angelic Miss had five wins but this, her career sixth, is her first beyond 1200 metres.

The mare, offered by Windsor Park Stud, fetched $250,000 at the 2018 Inglis Easter Yearling Sale when purchased by her trainer, Perth’s Simon Miller.

At Doomben, Tarzino (Tavistock) provided the stud with a highlight in the form of the unbeaten filly Gypsy Goddess.

From the David Vandyke stable, Gypsy Goddess made it three from three in the Eagle Way Quality (2000m) and would appear to have an exciting future.

The filly was forced very wide when making her run rounding into the straight yet once straightened for the run home had too many guns for her opposition to win quite comfortably. Hers was a very good staying effort and would suggest that the Oaks distance (2400m) should not be an issue.

“A big effort that,” said Vandyke. “Before her first run I thought she would be lucky to win a maiden – now I think she will win the Oaks. It’s amazing when horses keep improving, which is what she has been doing,” he continued.

“The Grand Prix in two weeks will be her grand final. I love the way she switches off. She did plenty wrong today and proved dominant,” added the winning trainer.

The stallion may be in for his best season yet, the Group 3 win by Dark Destroyer on Saturday following Levante’s brilliant return to racing two weeks earlier in the Counties Bowl (Listed, 1100m).

Although he took his time winding up in the straight, Dark Destroyer was not to be denied in the Bonecrusher Stakes (Gr 3, 1400m) and took his record to two wins and a Group 2 placing in five starts, the latter a third behind boom three-year-old Pareanui Bay (Lonhro) before finishing fifth in the New Zealand 2,000 Guineas (Gr 1, 1600m).

At Matamata, he sat back and wide for the first half of the journey but improved quickly to be third at the top of the straight. The first three separated themselves from the remainder in the straight and he did not collar the leader until the final few strides, although he gave the impression that there was more available if really necessary.

Apart from those already mentioned, New Zealand-breds made their mark at three metropolitan meetings across Australia on Saturday.

She is a sister to stakes-placed Pipiana and her dam is a half-sister to Telegraph Handicap (Gr 1, 1200m) winner Irish Fling (Darci Brahma).

Bred and raced by his breeders Guy Lowry and Garry and Mark Chittick, Waihaha Falls (Sacred Falls) added win two at start five in taking out the Dooleys Handicap (1500m) at Rosehill.

He is trained by John O’Shea who also trained the four-year-old’s dam, Mink (Scaredee Cat), who twice won in Sydney.

At Ascot in Perth, Memorable Miss (Showcasing), a $170,000 purchase by John Chalmers for Bob Peters, out of the Haunui Farm draft of the NZB 2019 Karaka Yearling Sale, added win three at start nine.

A consistent performer, Memorable Miss has been once further back than third (on debut) in her nine race career and Saturday’s win was her third in her last four starts.

Weona Smartone (Shamexpress) returned from an 11-week break to continue a streak which now stands at eight.

The five-year-old was a dual acceptor on Saturday but his trainer David Vandyke bypassed Doomben’s George Moore Stakes (Gr 3, 1200m) in favour of an open 1100–metre race at the Gold Coast, his first attempt in open company.

Widest into the straight, Weona Smartone accelerated quickly at the 100 metres and looked to put them away before Elixir (Exceed and Excel) went with him and the judge was called upon to separate them by a head.

Nonetheless, the Shamexpress (O’Reilly) gelding is indeed smart, giving 4.5 kilograms to the field when assigned 60.5 kilograms and will likely be better for the run.