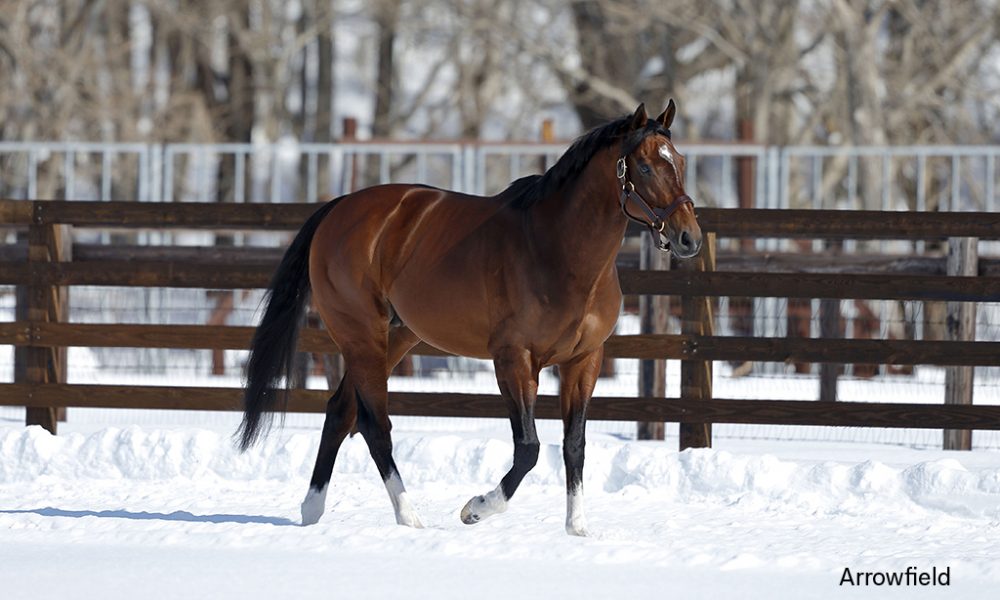 Treble for Maurice – It was a breakout weekend for former Arrowfield shuttler Maurice (Screen Hero), who sired three new first-crop winners in Japan. On Saturday, Stutti (2 f ex Lilavati by Zenno Rob Roy) was the first of winners as she broke her maiden over 1600 metres on debut at Niigata, followed by T O Mary (2 f ex Reagle Mary by Afternoon Deelites) scoring over 1200 metres at Sapporo. Then on Sunday, Infinite (2 f ex Morganite by Agnes Digital) ran out a comfortable winner over 1600 metres at Niigata. Maurice shuttled to Arrowfield for three seasons beginning in 2017 and covered a total of 278 mares. Given current travel restrictions, the multiple Group 1 winner has not returned to Australia this year but his first two-year-olds are set to hit the track down under this season. Stutti, T O Mary and Infinite join Kaiser Nova as first-crop winners for Maurice, bringing his tally to four.

Double for Shalaa – Arrowfield shuttler Shalaa (Invincible Spirit) brought up his fourth and fifth first-crop winners last week with Cream Of The Crop (2 f ex I’m So Glad by Clodovil) scoring at Catterick over five furlongs on Tuesday, followed by King Shalaa (2 c ex Baki by Turtle Bowl) making a winning debut in a maiden over a mile at La Teste de Buch in France on Wednesday. Shalaa stands at Arrowfield for a fee of $33,000 (inc. GST) in 2020. His other winners include Shalaalaa, who ran fourth in the Marble Hill Stakes (Gr 3, 6f).

Territories – Darley shuttler Territories (Invincible Spirit) sired his eighth individual first-crop winner when Rhoscolyn (2 c ex Zeyran by Galileo) built on his earlier promise to make all for a comfortable two and three-quarter length win in a novice contest of seven furlongs at Haydock on Monday. Group 1 winner Territories stands at Darley’s Kelvinside property in the Hunter Valley for a fee of $11,000 (inc GST) in 2020.

Vadamos  – Rich Hill Stud shuttler Vadamos (Monsun) sired his third first-crop winner on Saturday when Tarhun (2 c ex Miss Purity Pinker by One Cool Cat) broke his maiden over 1500 metres at Naples in Italy. Group 1 winner Vadamos stands at Rich Hill in New Zealand for a fee of NZ $15,000 (plus GST) in 2020.

Dubawi – A devastating turn of foot from Space Blues (4 c ex Miss Lucifer by Noverre) saw the Godolphin colt burst through off the inside rail and claim a maiden Group 1 success in the Prix Maurice de Gheest (Gr 1, 1300m) at Deauville on Sunday. The victory provided his sire Dubawi (Dubai Millennium) with a 43rd top level winner. Dubawi stood at Darley’s Dalham Hall Stud for a fee of £250,000 (approx AUD$456,000) in 2020.

Lope De Vega – The Jessica Harrington-trained Lucky Vega (2 c ex Queen Of Carthage by Cape Cross) stepped forward on his third start to land the Phoenix Stakes (Gr 1, 6f) at the Curragh on Sunday, and in the process became the 11th Group 1 winner for his sire Lope De Vega (Shamardal), who stands at Ballylinch Stud in Ireland where his 2020 fee was €100,000 (approx AUD$164,500).

Camelot – The Adrian McGuinness-trained Current Option (4 g ex Coppertop by Exceed And Excel) backed up his Galway Handicap success with a maiden stakes victory in the Platinum Stakes (Listed, 7f) at Cork on Saturday and in the process, became the 34th individual stakes winner for Camelot (Montjeu). Former Coolmore shuttler Camelot stands at Coolmore in Ireland where his 2020 fee was €40,000 (approx AUD$66,,000).

Gleneagles – Third in the Prix du Lys (Gr 3, 2400m) last time, Measure Of Time (3 c ex Inch Perfect by Theatrical) claimed his first stakes success on Sunday at Deauville when landing the Prix Michel Houyvet (Listed, 2800m) for Andre Fabre. The Coolmore runner was making it three wins from five starts, having won on his only start last year and following up at Clairefontaine on his return in May, and became the sixth stakes winner for his sire Gleneagles (Galileo). Dual 2,000 Guineas (Gr 1, 1m) winner Gleneagles stands at Coolmore in Fethard and his 2020 fee was €35,000 (approx AUD$57,500).

Le Havre – Port Guillaume (3 c ex Keira by Turtle Bowl) took his record to four wins from five starts and announced himself as a potential Prix de l’Arc de Triomphe (Gr 1, 2400m) contender after a dominant success in the Prix Hocquart (Gr 2, 2500m) at Deauville on Saturday. He becomes the 37th Stakes winner for Le Havre (Noverre), who stands at Montfort et Preaux for €50,000 in 2020 (approx AUD$82,200).

Mastercraftsman – The Roger Charlton-trained five-year-old Extra Elusive (5 g ex Nessina by Hennessy) followed up his second in the Steventon Stakes (Listed, 1m 2f) last month with his first stakes victory in the Rose of Lancaster Stakes (Listed, 1m2f) at Haydock on Saturday. Placed four times in stakes company, including third in the Gordon Richards Stakes (Gr 3, 1m 2f) last year, this was his first stakes win and he became the 71st individual stakes winner for former Coolmore shuttler Mastercraftsman (Danehill Dancer), who stood in Ireland for a fee of €25,000 (approx AUD$41,000) in 2020.

Not A Single Doubt – Saturday’s Rosebud (Listed, 1100m) at Rosehill was another reminder of the loss Not A Single Doubt (Redoute’s Choice) is to the Australian breeding industry after his son Anders (3 c ex Madame Andree by War Emblem) dominated the $140,000 event. The 73rd individual stakes winner for Arrowfield Stud sire Not A Single Doubt, who was pensioned earlier this year, Anders joins fellow Aquis Farm-owned colt, the Golden Slipper (Gr 1, 1200m) winner Farnan, and the likes of Miracles Of Life, Extreme Choice and Kenedna as stakes winners for the stallion. He covered 94 mares in 2019, his 15th and final season at stud.

Pride Of Dubai – Star Of Emaraaty (2 f ex La Grande Elisa by Ad Valorem) sprung a surprise in the Sweet Solera Stakes (Gr 3, 7f) at Newmarket on Saturday scoring at 66-1 and becoming the first European stakes winner and second overall for Pride Of Dubai (Street Cry). Pride Of Dubai is represented in Australia with Listed scorer Tanker and stands at Coolmore for a fee of $38,500 (inc GST) in 2020.

War Front – O’Brien senior may have been out of luck when his two runners finished out of the frame in the Silver Flash, but he was soon back in familiar territory when Military Style (2 c ex Together Forever by Galileo) led home stablemate Van Gogh (American Pharoah) to take out the Tyros Stakes (Gr 3, 7f) and become War Front’s (Danzig) 93rd individual stakes winner. War Front stood at Claiborne Farm in Kentucky for a fee of US$250,000 (approx AUD$347,000) in 2020, while his sire-son Omaha Beach will this year shuttle to Spendthrift Australia where he will stand for $22,000 (inc GST).