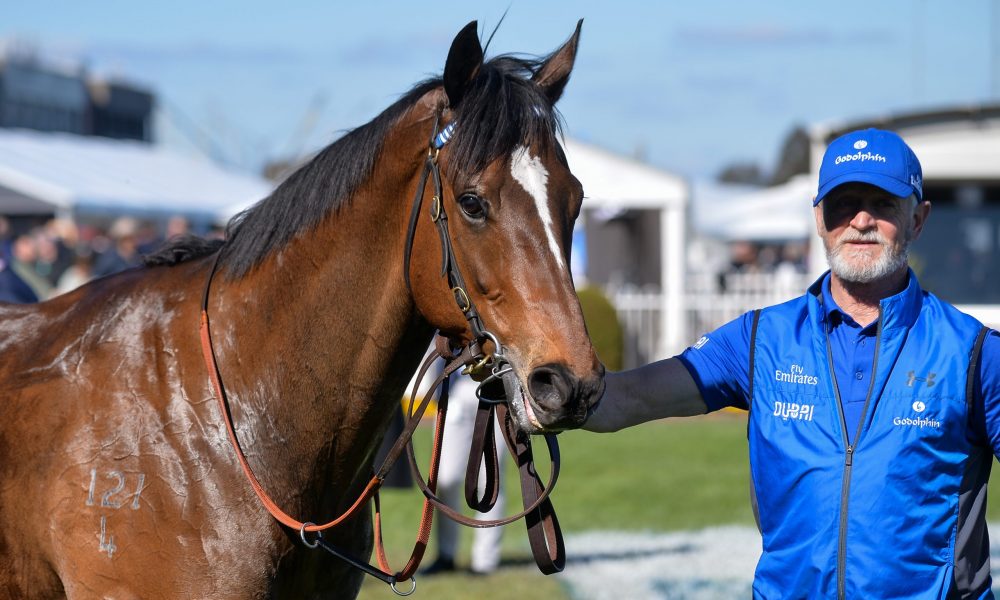 The Gordon Richards-trained Gytrash had the run of the race, sitting outside the leader for the trip. He looked all but home with 200 metres to go until Trekking found another gear and stormed home to beat the Black Caviar Lightning Stakes (Gr 1, 1000m) winner by a nose.

Trekking was steered to victory by Victorian jockey John Allen, who made the decision to spend two weeks in isolation in South Australia to be able to ride across the Adelaide carnival.

It is a decision that has proven fruitful for the Irish jockey, who won the South Australian Derby (Gr 1, 2500m) aboard Russian Camelot (Camelot) a week earlier.

“What a great little horse,” Allen said. “This is my first time riding him but I was surprised when I got out to the mounting yard and just realised how small he was.

“But he was tough. We had a super run.

“The runner-up gave a really good kick. I thought when I got out we were going to catch him. He kept kicking but to my lad’s credit he really fought and put his head down on the line.”

Trekking was just the second horse Allen had ridden for Godolphin and the first since Cummings has taken over as head trainer.

“I think I might have had one ride for them (Godolphin) before around Kyneton in a maiden,” Allen said.

“It was good to get the ride today.

“It’s my first ride for him as well so it was a good start to our partnership, hopefully.”

The Darley-bred gelding is one of three winners out of the three-time scorer Outdoor (Redoute’s Choice), who is a half-sister to the stakes-placed pair Minnesinger (Lonhro) and Entertains (Street Cry). Trekking’s second dam is the three-time Group 1 winner Serenade Rose (Stravinsky).

Street Cry (Machiavellian), who died in 2014, is responsible for 23 individual Group 1 winners including champion mares Winx and Zenyatta.

The Toby and Trent Edmonds-trained Wisdom Of Water provided his sire Headwater (Exceed And Excel) with a milestone win at the Gold Coast yesterday, becoming the Vinery Stud resident’s first stakes winner when taking out the Ken Russell Memorial Classic (Gr 3, 1200m).

The two-year-old’s runaway victory also proved momentous for Aquis Farm, who acquired a 50 per cent share in the colt earlier this week.

Wisdom Of Water justified his clear–cut favouritism for the two-year-old feature, leading the trip before scooting away in the home straight to win by two and three quarter lengths ahead of Tick Tock Boom (Spirit Of Boom) and Superare (Exceed And Excel), who dead-heated for second.

“He has had the two runs now and he should be cherry-ripe for the Atkins,” Edmonds said.

“I suppose the question is whether he will run a strong 1400 metres around Eagle Farm in the Atkins.

“There wasn’t much tempo in this race on paper and we elected to go forward. He rocketed out of the barriers and had to lead.

“I am sure if something else wants to lead he can take a sit on the pace.”

Purchased by Blandford Bloodstock at the Magic Millions Gold Coast Yearling Sale for $70,000 out of the Eureka draft, Wisdom Of Water (2 c Headwater – Regal Tier by Royal Academy) has now had five starts for three wins, earning a total of $309,600 in prize-money.

He is one of three winners out of Regal Tier (Royal Academy) who herself is out of Tiercette (Tierce), making her a half-sister to dual stakes scorer Tierqualo (Sequalo). Tiercette also produced Zedatier (Zeditave) who is responsible for stakes winner Flamboyer (Clang).

Regal Tier last year foaled another Headwater colt and was covered by Encryption (Lonhro) in September.

Another juvenile stakes win for Maher and Eustace

Ciaron Maher and David Eustace have produced another stakes-winning two-year-old this season in the form of Macroura (Snitzel), who took out the Woodlands Stakes (Listed, 1100m) at Rosehill yesterday.

Stepping up to stakes level at just her third start, Macroura looked trapped for a run in the home straight before a gap opened up at the 300-metre mark and she was able to sprint past the frontrunners to score by a length and a half under James McDonald.

The Peter and Paul Snowden-trained Marboosha (Dream Ahead) was second with Panna Cotta (Fastnet Rock) coming home a further length and three quarters away in third.

No future plans have been confirmed for Macroura, however a tilt at the J J Atkins Stakes (Gr 1, 1400m) on June 6 is not off the cards.

“It’s a shame today wasn’t 1200 (metres) and then your natural progression could have been to go to the J J Atkins,” assistant trainer Annabel Neasham said.

“That’s going to be a bit of a jump to go from 11 to 14 but we will see how she comes through and consider it. She does switch off so she may well get that trip.

“We will just let the dust settle. She is an out-and-out two-year-old so we would probably like to get one more win on the board before putting her out for a spring campaign.”

Neasham said Macroura shared similarities with Magic Millions 2YO Classic (RL, 1200m)-winning stablemate Away Game (Snitzel), who is also small in stature but has a desire to win.

“Ciaron always says she has reminded him of Away Game but she’s come to fruition a bit too late to have the same accolades,” Neasham said.

“But they’re similar in that they’re small but they’re mighty and have big hearts.She doesn’t know how to do anything else but win this filly.”

McDonald described Macroura as a professional filly and thinks she is worthy of a shot at the Atkins.

“I would say she is more of a sprinting, very fast two-year-old who excels when the pace is strong and she can come off their back and sprint very quickly,” McDonald said. “No harm in trying and this is the right time to do it.”

Macroura (2 f Snitzel – Zenaida by Zabeel) is an Aquis Farm homebred and is unbeaten from three starts, earning $144,965 in prize-money.

She is the first foal out of Zenaida (Zabeel) who herself is out of the unraced mare Madison Avenue (Morcon), making her a half-sister to three-time Group 1 winner Vosne Romanee (Electronic Zone) and the stakes-placed Meursault (Ekraar).

In 2018, Zenaida produced a colt by Exceed And Excel (Danehill) who was purchased as a weanling by Ampulla Lodge for $240,000 at the 2019 Inglis Great Southern Weanling Sale. He was then offered at this year’s Inglis Australian Easter Yearling Sale where he was snapped up for $380,000. In 2019 the mare produced a filly by Snitzel’s (Redoute’s Choice) young sire son and Aquis Farm resident Invader.

Talented mare Oceanex (Ocean Park) has booked her ticket to the Melbourne Cup (Gr 1, 3200m) in November, taking out the ‘win and you’re in’ Andrew Ramsden Stakes (Listed, 2800m) at Flemington yesterday.

The Mick Price and Michael Kent Jnr-trained four-year-old returned to Flemington for the first time since taking out the Matriarch Stakes (Gr 2, 2000m) in November last year, and remains unbeaten from three starts at the course.

Ridden by Mark Zahra, Oceanex jumped from the inside barrier and settled in the perfect position just behind Warrnambool Cup (Listed, 2350m) winner Too Close The Sun (Carlton House), who led the trip.

Zahra steered the mare off the rails in the straight and the pair burst through a gap with 300 metres to go, fighting off Adelaide Cup (Gr 2, 3200m) winner King Of Leogrance (Camelot) to win by three-quarters of a length.

“There’ll be a bit of nerves now,” Price said. “These owners, they’re like mums and dads, the Bonbeach footy club boys are in it. It’s going to be a sensational story.”

After three unplaced runs over shorter distances in Sydney earlier in her campaign, Price took the recommendation of Tom Marquand who suggested the mare would improve over longer trips.

And that she did, winning the Port Adelaide Cup (Listed, 2500m) at her last start before yesterday.

“Tom Marquand rode her in Sydney and said, ‘Do you want to try this over a mile and a half?” Price said.

“So her first go at 2500 (metres) in Adelaide was strong and today was fantastic.

“I know she drew barrier one and got the gun ride, but she beat the right horse in the race and she won convincingly.”

Despite training a plethora of Group 1 winners over the last decade, Oceanex will be the stable’s first Melbourne Cup runner since 2005 and Price said he will need to think about how to campaign her leading into the staying feature.

“I’ll have to think about it now, the pressure is on,” Price said. “She hasn’t had a grinding stayers prep or anything. She’s got a beautiful clean set of lungs and she stays.”

Oceanex (4 m Ocean Park – Danex by Danasinga) has only finished out of the placings in five of her 18 career starts which has seen her accrue $676,970 in prize-money.

She was purchased by Price for NZ$70,000 at the NZB Premier Yearling Sale at Karaka and is one of eight winners from the stakes-placed Danex (Danasinga), which include the BRC Rough Habit Plate (Gr 3, 2000m) winner Amexed (Pentire) and the stakes-placegetters Marcellina (Savabeel) and Digital Fortress (Savabeel) as well as the five-time winner Danahere (Dehere), who produced Listed winner Saint Patricks Day (Excelebration).

Danex has a two-year-old filly by Per Incanto (Street Cry), a weanling colt by Pierro (Lonhro) and was covered by Coolmore’s undefeated Triple Crown hero Justify (Scat Daddy) last spring.