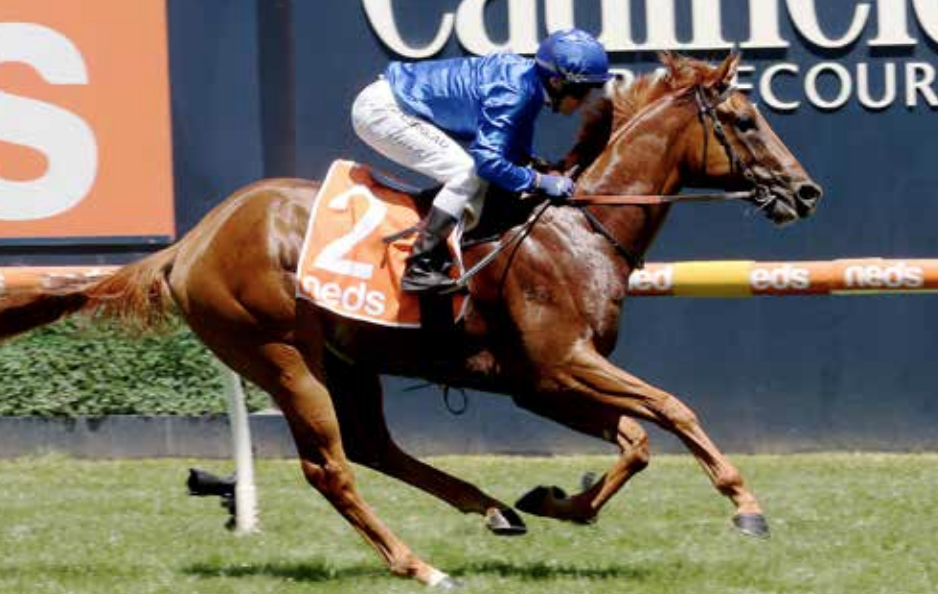 Appreciating a good barrier (2) on this occasion, Hanseatic settled closer in sixth place, but he was shuffled back badly nearing the home turn. Luke Currie could only manage a clear run by taking him widest of all on straightening but had to concede the leaders many lengths in doing so.

Hanseatic then produced his now trademark turn of foot to grab a neck victory over talented colt Rulership (I Am Invincible), who looked the winner after dashing clear at the 200 metres.

The stopwatch subsequently confirmed what most onlookers had come to realise – they had just seen a brilliant performance from an outstanding colt.

The Godolphin-raced and Anthony Freedman-trained Hanseatic has now appeared in On The Watch after all three of his starts, with all of those victories being highlighted by outstanding sectional times.

Hanseatic now heads to the Blue Diamond Stakes (Gr 1, 1200m) at Caulfield on Saturday week as the dominant favourite. He is a $2.30 chance with the TAB, with Rulership next at $6.00 and the filly Letzbeglam (Snitzel) at $8.00.

Letzbeglam was the surprise $31.00 winner of Saturday’s Blue Diamond Prelude (F) (Gr 2, 1100m) but her performance was very good, despite what her odds may have indicated.

The Trent Busuttin and Natalie Young-trained filly was advancing quickly in class after winning a Two-Year-Old Fillies’ Maiden (1100m) first-up at Werribee on January 21.

After a good beginning from the outside barrier, Letzbeglam was the widest of three vying for the lead before going to the front halfway down the straight. She then drew clear to score decisively by two and a quarter lengths from the well-performed filly Muntaseera (I Am Invincible).

But she now remains as a live chance in the Blue Diamond Stakes, especially considering she worked most of the way on a solid pace before drawing away to win convincingly in an impressive performance at only her second start.

In the feature race of the day, the CF Orr Stakes (Gr 1, 1400m), the Mike Moroney-trained colt Alabama Express (Redoute’s Choice) also overcame a wide trip to score in a smart time, his fourth win from only seven starts to date.

He settled nicely in fifth place but he was trapped three wide most of the way before improving rounding the home turn. Alabama Express took the lead at the 200 metres and then fought back gamely to defeat Group 1 winners Fierce Impact (Deep Impact) and Kings Will Dream (Cassamento).

But the sectional star in the CF Orr Stakes was Godolphin’s three-time Group 1 winner Avilius (Pivotal), who ran on well from back in third-last place in the 12-horse field to finish (1.7 lengths) fifth.

On a day of fast times in windy conditions at Caulfield, one of the fastest-run races was the Rubiton Stakes (Gr 2, 1100m) won by the Peter and Paul Snowden-trained filly Anaheed (Fastnet Rock).

Having her first start since finishing a good third in the Manikato Stakes (Gr 1, 1200m) at Moonee Valley in October, Anaheed tracked the free-running leader Sartorial Splendor (Brazen Beau) who set a breakneck pace.

Anaheed dashed clear at the 200 metres and then went on to win well by a length and a quarter from recent Kensington Stakes (Listed, 1000m) winner Bold Star (Needs Further).

It was Anaheed’s fifth win and her fourth at stakes level from 12 starts, with the talented filly looking primed for a very good preparation.

The runner-up Bold Star also deserves mention as the consistent South Australian-trained gelding made up many lengths after racing back in second last place in the nine-runner field.