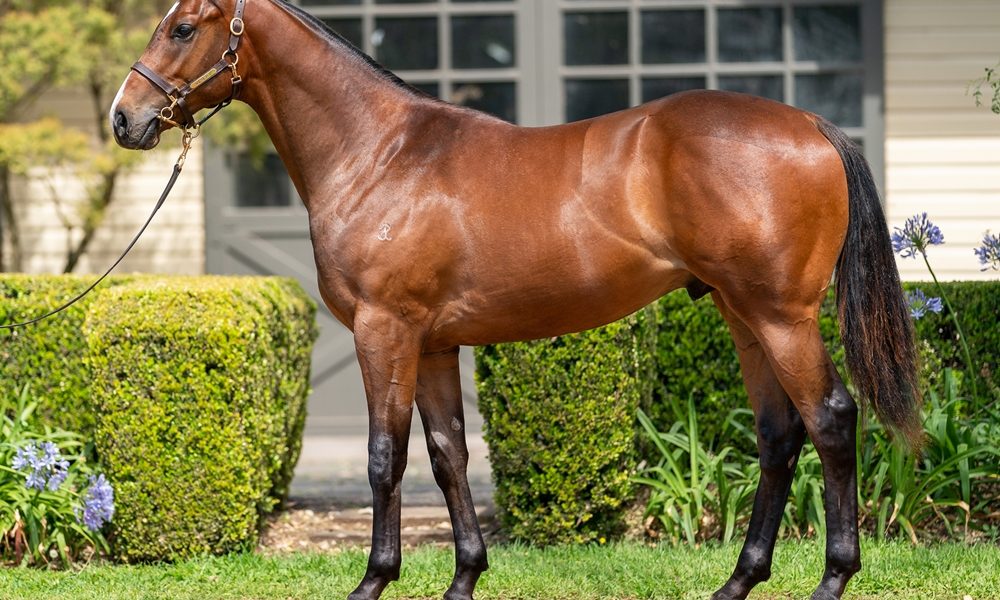 Having purchased a pair of fillies by the son of Snitzel (Redoute’s Choice) on the first day of the Gold Coast sale, the Ciaron Maher and David Eustace team bought their first colt by the four-time Group 1-winning stallion, going to $650,000 for the Vinery Stud-consigned youngster.

Throughout the week the first crop of both sires have been well received by buyers, with Trapeze Artist so far having sold 21 yearlings for an aggregate of $5.055 million at an average of $240,714. The 17 youngsters by Written By have made $3.65 million and recorded an average of $214,706.

The $650,000 Trapeze Artist colt is out of the unraced Invincible Spirit (Green Desert) mare Viviette, herself a half-sister to stakes-placed Halimi (Teofilo). Further afield, she hails from the same family as successful sires Cape Cross (Green Desert) and Iffraaj (Zafonic).

Offered as Lot 673, the colt was purchased by Justin Bahen and Bromfield Park for $330,000 at the Magic Millions National Weanling Sale from the Three Bridges Thoroughbred draft and Widden Stud’s Antony Thompson remembers taking a shine to the colt as a foal.

“He was a lovely colt. A very nice foal when he sold as well, he was very much admired here at the Magic Millions foal sale and he’s really gone the right way and presented beautifully and it was lovely to see him sell so well, firstly, and secondly go to such a leading trainer, which is very important,” Thompson told ANZ Bloodstock News.

Of Trapeze Artist’s performance on the Gold Coast, Thompson said: “They’re selling really well and going to the right stables, so we’re really excited about that and excited about what the future holds for him.”

Thompson has also been impressed with Written By’s results at the auction, and was particularly encouraged to see the $410,000 colt bought by Baker and Clarke – who were adding a second progeny of the stallion to their portfolio, having purchased a filly by the stallion on day two of the action for $270,000

“That was another really good result. The yearlings by Written By have been very popular, they’re real trainers’ horses and I think Bjorn is a really big fan of Written By having bought a couple. So, again, it’s great to see a great trainer and a great judge really chase those Written By yearlings. He was a really nice colt and pretty well bought by Bjorn and Jim Clarke,” said Thompson, who also consigned the youngster.

Catalogued as Lot 621, the colt is out of the prolific Listed-winning Commands (Danehill) mare The Messina Nymph, herself a half-sister to Singapore Champion Why Be (Success Express).

Meanwhile, Brave Smash (Tosen Phantom) also enjoyed his biggest sales ring result, when Australian Bloodstock – who raced the stallion – and trainer Ciaron Maher forked out $260,000 for a colt by the Aquis Farm sire.

Catalogued as Lot 794 and offered by Rothwell Park Thoroughbreds, the youngster was purchased by Lacoste Bloodstock for $120,000 at the Magic Millions National Weanling Sale from the Willow Park Stud draft and he is out of winning Exceed And Excel (Danehill) mare Bellevue Girl, making him a half-brother to Group 3 scorer Bellevue Hill (Pierro).

Neorealism’s (Neo Universe) sole entry in this year’s Magic Millions catalogue – a colt from the Gleeson Thoroughbred Connections draft – was purchased by DGR Thoroughbred Services and trainer John Thompson for $225,000.

The colt by the Oaklands Stud shuttler was offered as Lot 781 and is the third foal out of the placed Stratum (Redoute’s Choice) mare Be Alle Belle, whose two foals to race have both been winners.

The Autumn Sun (Redoute’s Choice) enjoyed another lucrative day in the sales ring, headlined by two colts who were purchased by Michael Wallace and Freedman Brothers and Gai Waterhouse and Adrian Bott with Kestrel Thoroughbreds for $500,000 (Lot 790) and $475,000 (Lot 819) respectively.

The Arrowfield Stud-based son of Redoute’s Choice (Danehill) remains the leading first-season sire by both average and aggregate, having sold 24 yearlings over the four days of trade for $8.075 million at an average of $336,458, while Coolmore’s Triple Crown-winning shuttler Justify (Scat Daddy) is sitting just behind him, having sold 23 yearlings for total receipts of $6.9 million and a recorded average of $300,000.