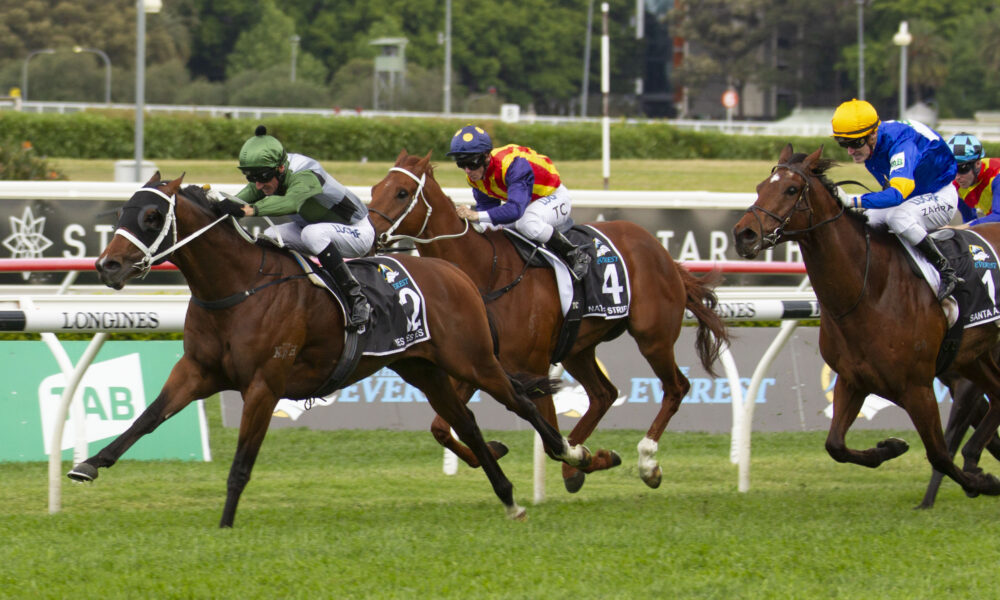 A late inclusion in the star studded field and aided by a 3.5kg weight advantage plus blinkers, three-year-old colt Yes Yes Yes, with Glen Boss in the saddle, produced a stunning turn of foot in the home straight to overhaul the leader Nature Strip (Nicconi) before holding off the fast finishing Santa Ana Lane (Lope de Vega) to score by a half-length. Another late inclusion in the race, Godolphin’s gelding Trekking (Street Cry), also powered home late to be third, a long neck behind Santa Ana Lane and just ahead of pacemaker Nature Strip. Behind the first four Pierata (Pierro) and Classique Legend (Not A Single Doubt) could be considered a little unlucky while Arcadia Queen (Pierro) and Coolmore’s fly in challenger Ten Sovereigns (No Nay Never) were both a shade disappointing. Yes Yes Yes, although not one of the favourites, went into The Everest with excellent form after a narrow defeat by Bivouac (Exceed And Excel) in the Golden Rose Stakes (Gr 1, 1400m) and some promising performances as a two-year-old highlighted by his victory in the Todman Stakes (Gr 2, 1200m) in which he set a race record of 1:08.40. The journey of Yes Yes Yes from sale yearling to Everest winner and exciting stallion prospect has taken a few twists and turns. He was offered at the 2018 Magic Millions Gold Coast Yearling Sale where he was selected by respected bloodstock agent John Foote and bought for $200,000, one of the highest prices paid for a member of the first crop of his sire Rubick (Encosta De Lago), a speedy, Group 2 winner closely related to three times champion sire Redoute’s Choice (Danehill). At the time John Foote was acting for clients of Victoria’s top trainer Darren Weir who prepared the colt early in his career before his transfer to Chris Waller in Sydney after Weir’s well documented disqualification. Coolmore Stud, home of Rubick, astutely bought a 50 per cent interest in Yes Yes Yes last March and has now reaped a tremendous reward. Yes Yes Yes was bred in NSW by Brett Bradley in the name of Arlington Park Racing, offering him in the Kitchwin Hills draft at Magic Millions. He is the third foal and third winner for his dam Sin Sin Sin (Fantastic Light), winner at two years of the Wellington Boot (1100m) and two other 1000 metres races in country NSW from 24 starts. Sin Sin Sin’s first foal, the mare Dee Nine Elle (Duporth), showed she could produce something with ability as she won five races in Brisbane and Sydney and placed in a Listed event in Brisbane to earn $296,275. Brett Bradley bred Dee Nine Elle, sold her to leading Brisbane trainer Tony Gollan as a yearling and wisely bought her back at the end of her racing career, sending her to Merchant Navy (Fastnet Rock) for her first mating in 2018.