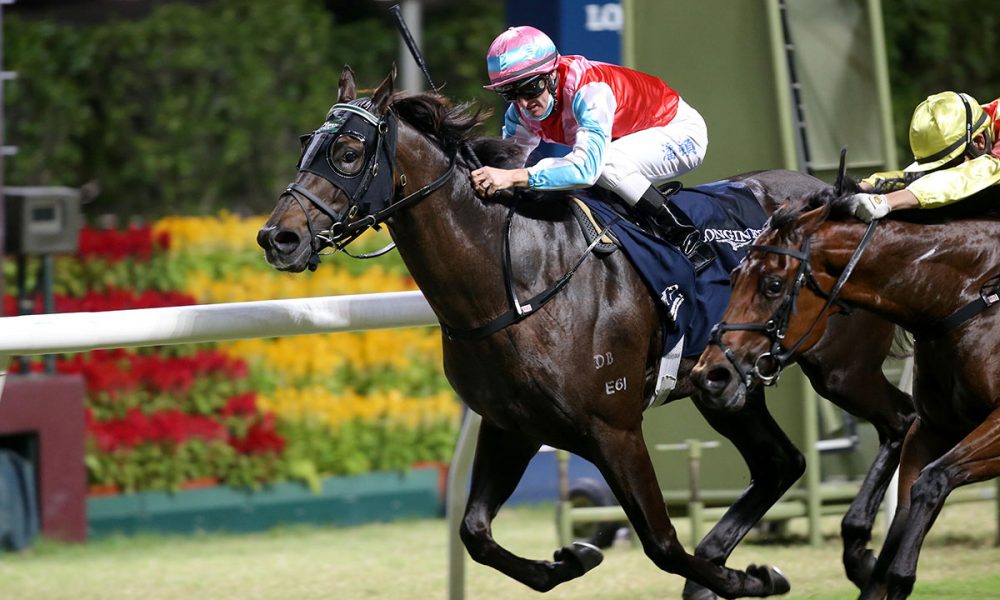 Zac Purton has forged to a double-figure lead over arch-rival Joao Moreira in the 2021/22 Hong Kong jockey’s championship after slotting a quartet at Happy Valley yesterday evening, crowning the display with victory aboard Harmony N Blessed (Magnus) in the Class 3 The LONGINES Cup Handicap (1000m).

A four-time champion jockey of Hong Kong, Purton now leads the 2021/22 race with 25 wins to Moreira’s 14 after 12 meetings, attributing a blistering start to the strong form of the Hayes and Shum’s stables.

“Generally, my trainers take a little while to get going at the start of the season, but Danny came back with a purpose that he wanted to get going early and so did David,” Purton said.

“So, two stables having horses ready early, gets me rolling early and then I get feed off that and get support from other stables and then it’s the flow-on effect.

“Being stuck here in the off-season – all my friends had left town – so my weight was in a good spot. I didn’t have to kill myself to try and get down (to his riding weight) – and the injuries I had last season are a lot better than they were.

“So, you just package everything up and you can see what happens when I get given the opportunities.”

The Australian’s vigour was instrumental aboard Harmony N Blessed, who took joint leadership in the DBS x Manulife Million Challenge with a tremendous speed exhibition in the LONGINES Cup. He was subsequently joined at the top of leader board by Frankie Lor’s promising Fa Fa (He’s Remarkable), who provided Vincent Ho with a double after snaring the Class 3 Telecom Fighters Handicap (1650m).

Hayes confirmed post-raced Harmony N Blessed will be sent to Conghua for a spell after posting his second win in the DBS x Manulife Million Challenge series for a total of 30 points, level with Fa Fa.

“I thought that it was outstanding, he showed a lot of fight, he got a lot of heat through the run – it’s a credit to the horse,” Hayes said after Harmony N Blessed – winner of four races since November – courageously staved off Harmony Fire by a nose under Purton’s urgings.

Purton, who logged a quartet at Sha Tin on Sunday (17 October), is in sizzling form, having ridden 12 winners from 33 rides this month.

Cruz succinctly captured the excellence of Purton’s current form by hailing the 38-year-old’s winning ride atop Viva Popcorn in the Class 5 All Joyful Handicap (1650m) as ‘perfect’ after the Australian restrained his mount out of a speed battle going into the first bend before angling out around the home turn to find clear running.

“He’s a nice horse, he’s had a good preparation,” Shum said. “Even though he has drawn 12, before the race, me and Joao thought the pace wouldn’t be too fast and he could follow Manfred Man’s horse (Great Harvest).

“Unfortunately, he was pushed three-deep with no cover but he’s a tough horse. It was a good win. I’m very lucky with the owner, he supported the International Sale and he supported me.

A three-year-old, Romantic Warrior was bought for HK$4.8 million at the 2021 Hong Kong International Sale in June by Peter Lau Pak Fai.

Continuing the form which saw him register his 400th Hong Kong victory on Sunday, Ho combined with Benno Yung’s All Joyful (Shocking) to land the Class 4 Flying Elite Handicap (1650m). It was the Shocking (Street Cry) gelding’s second win from ten starts.

“He’s been a bit unlucky last season,” Man said, celebrating his yard’s sixth win of the term. “This time, he had some luck. He can win again at this distance, hopefully.”

Alloy King (Zoffany) extended Jimmy Ting’s outstanding start to the season by setting a class record of 1m 09.17s in landing the Class 5 Great Harvest Handicap (1200m) under Antoine Hamelin. By Zoffany (Dansili), Alloy King presented Ting with his seventh win for October and the stable’s 11th for the season.